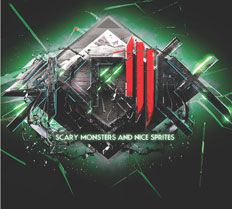 Most AP readers would know Sonny Moore from his singing duties on From First To Last’s first two albums. But when Moore left the band after the release of 2006’s Heroine due to vocal cord problems, he began an unusual solo career which has now led to his electronic work in Skrillex. On Scary Monsters And Nice Sprites, Moore has hit his mash-up groove, combining monster dance riffs with melodic ambience. The EP title is fitting, since these nine tracks (three of which are remixes) embody both sides of Moore; the rambunctious, punk-rock kid who screamed his head off in From First To Last (see the chaos of “Kill EVERYBODY”), but also the melodic, pensive adult who can seamlessly collaborate with pop singers like Penny and rappers like Foreign Beggars and Bare Noize. But it’s on “Rock ’N’ Roll (Will Take You To The Mountain)” that Moore will really grab his previous punk audience, with crazy, frenetic sampling and the kind of mash-ups made for the mosh pit. When someone repeatedly screams, “Oh, my God!” right before the massive breakbeat-breakdowns, it’s time to bring a wall of death to the dance floor.