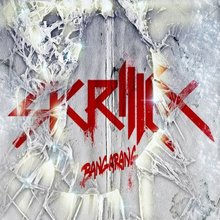 Fresh off five Grammy nominations, what can Sonny Moore, last year’s most polarizing artist, do for an encore? How about drop a new EP that will offer aid to both haters and fanatics alike? The trick is that the songs the former folks—the ones who sniff that Skrillex is making “brostep”—will hate the most actually show him at his strobe-flashing, fist-pumping best. “Right In” and the title track are one long adrenaline rush of stabbing keyboard chords, sawed-off vocal samples and Skrillex’s trademark: squirming, squalling synth lines, which simulate the excitement (if not necessarily the virtuosity) of a guitar solo. This is the stuff that pisses off bedroom dubsteppers, but it’s uncomplicated, catchy fun, the equivalent of 21st-century hair metal—and that’s meant as a compliment. “Summit,” a collaboration with delicate-voiced British songstress Ellie Goulding, is similarly appealing, and thus, likely to receive the same dismissive treatment. Yet there must be worse things in the world than an infectious piece of three-chord synth-pop.

If you want to complain, listen to “Breakn’ A Sweat,” a collaboration with what remains of the Doors that’s less dubstep than ghastly misstep. (The faux-rap interjections force you to imagine MC Hammer having his way with “Light My Fire” back in the day.) And whoever authorized the soundbite from a vintage Jim Morrison interview in order to give this track his posthumous imprimatur ought to be worried about his vengeful ghost. Meanwhile, “Right On Time” is little more than a sped-up, slowed-down rhythm track, and although the Varien “Orchestral Suite” that closes the EP is clever enough, it feels like a Disney soundtrack excerpt searching for its parent album.

Those pieces, however, can most charitably be viewed as experiments. The go-for-the-throat tracks on Bangarang don’t tell us much about Skrillex’s long-term prospects. But they certainly demonstrate that for the moment, he’s going to have to be dealt with—by friends and foes alike.