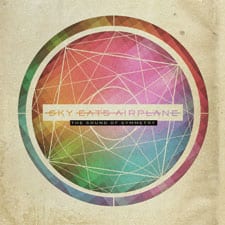 The Sound Of Symmetry

Practice makes perfect. Though perfection or even the balance suggested by title of Sky Eats Airplane's new EP is still out of reach, the Fort Worth, Texas, quintet have definitely drawn closer. There were many occasions during SEA's first two albums where their blend of clean and anguished vocals, screamo breakdowns, melodic hooks, ambient synth and throbbing programmed beats felt imperfectly grafted onto each other like Frankenstein's monster, with all the seams showing. The Sound Of Symmetry's stylistic movements feel much more organic, bleeding into each other with greater purpose, rather than feeling dropped on top of each other like the LEGO Songwriting Kit. It allows SEA to begin to realize the promise of their multi-dimensional approach.

The opening track, "The Contour" in particular makes fine use of their dynamic shifts with segues that are quick but not abrupt. There's a better balance of singing and screaming, with the latter operating like a devil on the shoulder, spewing short responses backed by knotty writhing breakdowns and sputtering beats against the lugubrious major-chord melodies. Similarly, the mesh between guitar crush and breezy wavering synths is much tighter. Making full use to the sonic spectrum, there's even a 20-second break toward the end that dips into wafting jazz fusion before continuing onto the climax, as new vocalist Bryan Zimmerman sings, "My siren satellite, you're circling this stage," promising "all the while it is your heart I will be stealing."

The title track opens with grinding aggression, moving into throbbing call-and-response guitars. The percussive throb never really lets up–even the melodic moments stutter and shake until alighting on the creamy center as Zimmerman implores a girl to take a chance on him: "Open your eyes and breathe." The music swells and you can feel the aggro bile building in the throat like an incipient cough. While it's perhaps a bit too jumpy–especially from a track demanding trust–the guitars do rattle and writhe with impressive purpose.

"Motion Sickness" completes the EP and offers yet another tact, with an even slower build riding a pretty keyboard line. There's a spooky air as the vocals come in and the track gets a little glitchy. Zimmerman really showcases his pipes with some soaring vocal lines before the three-minute track goes anthemic in its second half. It doesn't have the propulsive feel of the first two, tending to drift a bit more, fueled by Zimmerman's oscillating tenor, closing with heavy, clattering beats and a swell of synth.

Some fans will undoubtedly lament the declining aggression, but The Sound Of Symmetry's songs feel much better crafted and less like a footrace between Two-Face's competing personalities. The addition of Zimmerman is particularly welcome for the evolving approach, as his pliable vocals seem better suited to the material than his predecessor Jerry Roush, whose tone wasn't as inviting. Though only "The Contour" is a hands-down, complete triumph, this EP suggests they've really honed their approach, and builds anticipation for a new full-length.