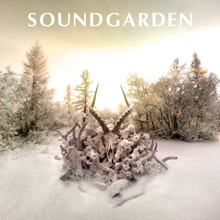 How angry were you in 1997? If your answer is, “Not very” or “I was 3,” there’s a chance you’ll be unimpressed with Soundgarden’s first album in more than 15 years. But if you were an undulating ocean of angst in 1997 and subsequently shattered by Soundgarden’s premature end, King Animal is like opening a portal to a time and place for which you probably never thought you’d be nostalgic.

Picking up precisely where 1996’s Down On The Upside left off, King Animal is both radio-friendly and vaguely experimental with chugging riffs, challenging rhythms and layered production that (intentionally or not) evoke ’90s sensibility far more than any VH1 retrospective ever could. While frontman Chris Cornell remained in the modern rock spotlight in the interim with Audioslave and four hit-and-miss solo albums, King Animal is unmistakably Soundgarden.

Lead single and album opener “Been Away Too Long” is a little too on the nose as an obvious comeback anthem, but most of the other 12 songs feel familiar yet fresh for a band with 13 years' worth of back catalog. There are upbeat, straight ahead bar rockers (“Non-State Actor” and “Attrition”) that could have fit neatly on Soundgarden’s first three full-lengths, but the majority of King Animal feels like it easily could have been B-sides from Superunknown (the ominous “Blood On The Valley Floor” and trippy “A Thousand Days Before”) or Down On The Upside (the mid-tempo “Halfway There” and melancholy “Bones Of Birds”).

Cornell hasn’t been a full-time screamer since 1991’s Badmotorfinger, but his masterful croon-to-shriek shifts prove he’s still got the same reckless disregard for his vocal cords. Kim Thayil’s guitar tone is front and center throughout and nearly as much of a band trademark as Cornell’s voice while bassist Ben Shepherd and drummer Matt Cameron each have shining moments.

But with prolonged anticipation comes high expectation and the band—who co-produced King Animal with Down On The Upside producer Adam Kasper—make some missteps. There are frequent mid-song jams that don’t go anywhere (“By Crooked Steps”) and a few songs that come too uncomfortably close to Cornell’s recent and suspect solo work (“Black Saturday” and “Halfway There”).

Still, it’s difficult to imagine a new Soundgarden album that would sound startlingly different from King Animal. It’s right in line with the band’s natural progression; so much so that it’s almost difficult to believe it didn’t come out a decade ago. Is it as evocative and emotive as their earlier albums? Not quite. But it’s new Soundgarden songs that sound like old Soundgarden songs—and if you’re of a certain generation or disposition, that’s been a long time coming.

“A Thousand Days Before”