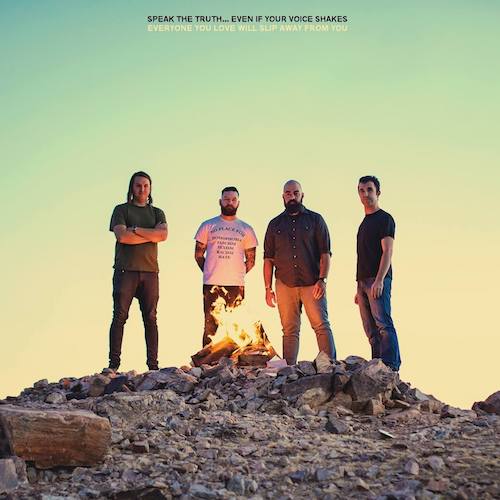 Speak The Truth… Even If Your Voice Shakes

Everyone You Love Will Slip Away From You

Happily, this album is pretty much exactly what you’d expect from a Finch/Senses Fail collaboration. While Everyone You Love Will Slip Away From You is a contemporary work in its own right, it does tap into the beloved sounds of early 2000s emo, pop punk and post-hardcore and will surely leave longtime fans more than satisfied.

The bulk of the record is in major scale, sounding joyous and upbeat, even though the majority of the lyrics are absolutely depressing. The title track is the perfect example of this, as vocalist Buddy Nielsen cheerfully sings, “Sometimes I feel like I’m the/Only one burdened with/Constant thoughts of death and despair,” while the drums keep a snappy rhythm. The feather-like lightness of the music acts as a brilliant counterbalance to weighted topics such as death, the meaning of life and one’s place in the universe.

“Carpenter In Prison” is the most captivating song structurally and in terms of production. The melody stands out as it is actually morose enough to match the lyrics, which is unusual for this record. The band also intentionally muffle pieces of the chorus as if they’re being conveyed via an old or broken radio, which emphasizes the fact that this was, for the most part, a DIY project. It brings a charming garage-band vibe to the record that adds even more authenticity and sincerity to the table.

While pop punk is the predominant current running through the record, Everyone You Love Will Slip Away From You does get slightly more aggressive as it progresses. Nielsen brings his hardcore vocal stylings to tracks such as “Go For The Throat” and especially “At Least There’s Always Lexapro,” with heavier, faster instrumentals to back him up. However, the most peaceful and uplifting song, “Show Your Scars,” follows directly after these displays of force to conclude the record. Gang vocals repeat over and over again, “I know it’s hard to be who you are/Don’t be afraid to show your scars,” lending a positive resolution to struggle and sadness in the form of acceptance.

Speak The Truth’s debut record is emotionally and sonically complex, even though every song comes across as completely natural and easy to digest. That essence of contrast, or even contradiction, is what defines this record and makes it unique. It is a pleasurable, exciting and comforting listen for all of the world-weary ears out there.

You can buy the album here and stream it below: