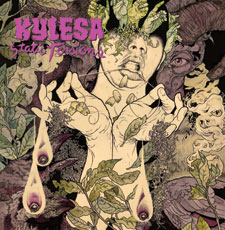 Following three albums' worth of crusty metal fused from the spare body parts of the band's revolving lineup–and after adding a second drummer-Kylesa return with Static Tensions, an album that pushes further into new melodies and refinement. Though some might fear the band have lost their edge, their latest album is more focused and, like a laser beam, ultimately more destructive when concentrated. Case in point: "Almost Lost," which starts with layered chanting before allowing the guitars to switch gears from furious metal riffs to a more melodic and airy verse. Although a more varied use of the two drummers would be appreciated, the overall echoed effect with the cleaner production offers a complete, homogenized sound, which, when consumed en masse, makes for a killer album.