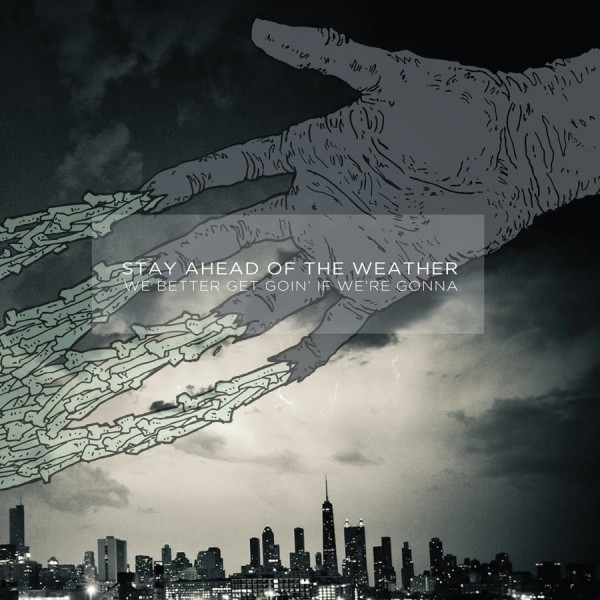 Stay Ahead Of The Weather

We Better Get Goin’ If We’re Gonna EP

The members of this Chicago, Illinois, four-piece might play in other bands—namely Into It. Over It., Native and CSTVT—but Stay Ahead Of The Weather are anything but a side project. Rather, they’re a celebration by four friends of the malleable and accommodating Midwest DIY scene, as well as the sounds that have inspired them along the way. Lead by Into It. Over It.’s Evan Weiss on vocals and guitar, these five songs are a departure from the quiet, introspective nature of his solo outfit and are more in line with the noisier, jerkier energy of Native and CSTVT. Really, though, this is more of a throwback to the raw and cathartic sounds of the Get Up Kids, Piebald, the Promise Ring and Braid. Raw harmonies and brash melodies are held together by a guttural emotional outpouring that’s as strong as it is fragile, and as full of hope as it is anguish. “Impressions & Impressing People” is a ragged, lo-fi burst of desperation which even manages to throw in a Jawbreaker quote as pleading vocals soar over catchy, urgent guitar lines, while “Butchering A Back Catalog” is a perfect slice of intelligent indie rock mixed with poppy punk sensibilities that channels the best of their influences. Wonderfully lo-fi and full of momentum, We Better Get Goin’ If We’re Gonna is an incredibly strong start. Let’s just hope with everything else the members have going on, Stay Ahead Of The Weather have time to do more in the future.