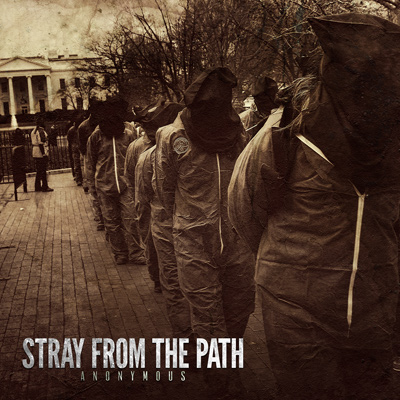 First of all, can someone, anyone, tells us what that weird spitting noise is that Stray From The Path vocalist Andrew “Drew York” Dijorio makes on pretty much every song on this album? Whatever it is, it fucking rules! Verse, chorus, blllllleeeeeck. This Long Island hardcore band has been toiling in the New York scene since 2001 and this is their fourth Sumerian release and seventh release proper. So, yeah paid their dues and all of that. Politically charged and very much influenced by groovier, hip-hop-friendly hardcore bands like Rage Against The Machine and Downset, Stray From The Path up the intensity on Anonymous with some real mosh-worthy riffs, fastcore runs and nutso screaming that brings to mind dated late-’90s hardcore bands like Struggle. Although on paper, this band don't quite fit in on the Sumerian roster, they’d have no trouble gelling on a bill with their more metal-based labelmates like Born Of Osiris or Asking Alexandria. It’s the same frantic energy and passion, but done through the lens of Madball and Agnostic Front instead.

Some of the lyrics on Anonymous are super-cheeseball; when they work, it’s just “fuck yeah” all over the place (“Badge And A Bullet” is direct homage, lyrically and musically, to “Killing In The Name”) but when they don’t, it’s just kind of embarrassing. (“Counting Sheep,” a song that references hashtags and Facebook re-posts? Really?) Despite the knuckle-dragging moments on Anonymous, Stray From The Path have definitely positioned themselves as one of the most interesting and curious hardcore bands around right now. You can’t listen to this album and not talk about it, marvel at its courageous moments, scoff at its many oddball moments and shake ass at some of those monster grooves.