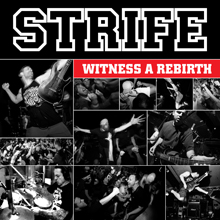 First thing’s first: what in the h-e-double-hockey-sticks is that thing growing on the lower half of Strife vocalist Rick Rodney’s face? We mention this because aside from ex-Sepultura drummer Iggor Cavalera’s guest spot on the skins, the frizzy lumberjack-er Rodney’s sporting is the only real difference between present-day Strife and the Strife of their 1990s heyday that’ll jump out at ya. In order to make no bones about this rebirth/reunion being about what initially brought Strife to hardcore scene prominence, the band have essentially fired the engine that’s been dormant since 1997’s In This Defiance. In fact, Strife spend so much time in rewind mode on Witness A Rebirth (most saliently: there’s a song here called “In This Defiance”—there wasn’t an “In This Defiance” on In This Defiance) that accusing them of doing little more than trying to relive their storied past will be greeting with choruses of “Well, duh”s and “Exactly!”s.

They may have graduated from Geocities and Angelfire and no longer book tours using Book Your Own Fucking Life, but their sound and style hasn’t progressed much beyond the metallic hardcore sound and style they helped to foster. “Thudding NYHC attitude meets OC skate rock progressions meets Slayer-tinged vitriol” is how Strife was once described many moons ago and it’s a that description holds true today, even with the cleaner sound and improved musicianship. The quintet may make it difficult for listeners to distinguish new songs like “The Burden,” “Carry The Torch” and “Show No Mercy” from anything in the band’s discography, but Strife are doing what Strife do best and doing what their fans want. It makes one wonder how many sly grins and sidelong glances were darting around the rehearsal room when the ironically named “Never Look Back” was written. Mind you, you’ll be too busy digging out your varsity letter stencil, hunting for old Snapcase jerseys online and lobbying for the Strife/Terror/All Out War “Old Dudes Still Bringin’ It” tour to care.