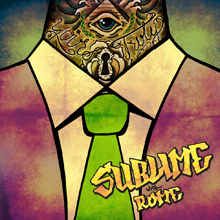 The late, great Brad Nowell rocked out ska and spat hip-hop verses like few white guys ever have—and then passed away in his prime. In death, the reggae-schooled bro became the meathead’s Bob Marley. As Sublime With Rome proves, however, Nowell is irreplaceable. His former Sublime bandmates Bud Gaugh (drums) and Eric Wilson (bass) may claim they’re not trying to replace the singer by hiring 23-year-old superfan Rome Ramirez to front a new incarnation of the band—but, you’ll note, it’s not called the Long Beach Dub Allstars With Rome. It’s hard to make it through a week without hearing signature Sublime singles “Date Rape” or “What I Got,” so the world is still clearly thirsty for more from the band. Although Yours Truly sounds exactly like what you’d want from a resurrection album, ultimately it comes up short.

Discriminating fans will recognizeYours Truly as Sublime lite. Sublime producer Paul Leary (of the Butthole Surfers) returns, and the album uncannily recreates the group’s peak sound from that album. In fact, the disc sounds like it’s composed of samples from their bestseller: Most songs have a clear link to a previous catalog favorite. Leadoff single “Panic” starts the album, borrowing the martial horn blasts from “Date Rape” and moving into schizoid tempo changes. “My World” plays like the speed-skanking “Same In The End,” with a touch of 311-style crunchy funk guitar thrown in—though Ramirez’ straight-from-the-heart vocals are what send it into the emotional stratosphere. “Paper Cuts” is faux-hardcore reminiscent of “Paddle Out.”

Every tune feels familiar, for better or worse. With acoustic guitars and bouncy bongos, “PCH” could be a leftover Jack Johnson track. The smooth-jazz sax solo in “Murdera” isn’t exactly a bold departure. None of the music hits a high note like the trombone solo does in “Wrong Way.” And the Wiz Khalifa cameo on “Can You Feel It” (a “Pawn Shop” retread) won’t dispel the rapper’s rep for having suspect skills.

For all of his bro-ness, Nowell was not just a singular soul, but a product of his time, and zeitgeist was on his side. His hot mess of a life had a backdrop of the 1992 Los Angeles riots, shifting racial politics and the alternative movement itself. The late singer/guitarist penned innovative songs about a bitchy landlord, voodoo, skinheads, dog shit, burritos and memorable characters who became hookers, got busted lips or spent the day in bed. Add in some left-field samples and an unpredictable mix of musical genres, and Nowell’s Sublime was a band for the ages.

Gaugh and Wilson are integral parts of the Sublime sound, but even with Ramirez’ considerable talent, the new lineup simply don’t match Nowell’s frame of reference. With Nowell, Sublime probed the LBC’s seedy underbelly, while Sublime With Rome’s songs are about chasing girls and feeling groovy, and the new lyrics are more comparable to early-era Beach Boys tunes. And while a downer direction isn’t necessary—though the word “sublime” implies a blend of darkness and delight—Yours Truly’s positive vibes don’t produce a gem on par with “What I Got.” The peppy, unplugged “Spun” is an obligatory meditation on judgment and mortality, but Yours Truly goes no deeper or wider. Though Sublime With Rome’s debut LP is a promising collection of summer songs, under the carefully fabricated surface, it’s hollow.