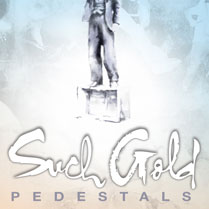 Such Gold's debut EP, 2009’s Stand Tall, was a pitch-perfect, gimmick-free example of how solid the melodic hardcore-influenced pop-punk sound could really be when imbued with an indelible enthusiasm and adolescent passion. With the band's six-song follow-up, Pedestals, the quintet tap into greater shades of aggression and more intricate guitar work that belies their short time together, all the while staying true to their steadfast expressions of personal struggle.

Pedestalstakes greater influence from the versatile array of punk sub-styles the band prescribe to, from the Progress's carefully squiggly guitar leads ("Gut Rot") to the breathtaking speeds and aching melodies of A Wilhelm Scream ("So Close," which Person L's Kenneth Vasoli hops on to relive his nascent pop-punk days in the Starting Line). Earth Crisis' Karl Buechner even guests on the closing title track to bellow out the record's central theme alongside frontman Ben Kotin, but instead of a crushing breakdown, the song ends abruptly, leaving one wanting more.

Granted, fans of the band's closest peers (Set Your Goals) and predecessors (the Movielife) should remain loyal fans with Pedestals, but they're getting something extra this time around that promises a bright and steady future for both parties.