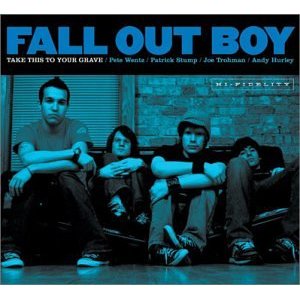 Take This To Your Grave

One spin of Take This To Your Grave and a quick peek at the band’s endearing DIY video for the impossibly catchy “Dead On Arrival” was all it took back in 2003 to realize that the embryonic Chicago pop-punk four-piece Fall Out Boy were on their way to becoming a global phenomenon. From that moment onward, everything the band achieved—wealth, widespread fame, gold and platinum records, famous wives and all the other perks of superstardom—came as little surprise to those keeping score at home. Filled with a near overabundance of youthful energy, world-class riffs and bassist/lyricist Pete Wentz’s devilishly poetic bashing of those who wronged him, Grave is one of the definitive FOB recordings, and to some, remains their finest moment.

As debuts go, Grave is about as good as it gets (the album is considered the “official” debut, but technically speaking, the extremely rough Fall Out Boy’s Evening Out With Your Girlfriend is FOB’s first full-length). Sporting new drummer Andy Hurley (the quiet backbone of the band) and with singer Patrick Stump having also recently picked up a guitar, the new-and-improved FOB (rounded out by guitarist Joe Trohman) sequestered themselves in Butch Vig’s Smart Studios in Madison, Wisconsin, with producer Sean O’Keefe, emerging with a punchy, ratchet-tight collection of popcore classics light years ahead of Evening Out. If the album didn’t immediately blow you away, sooner or later, you succumbed to the inevitable.

While no means perfect all the way through, the album shines so brightly at times, you have to look really hard to find the imperfections. The first four successive tracks open the album in gigantic fashion, with a dizzying sprint through lead track “Tell That Mick He Just Made My List Of Things To Do Today” into “Dead On Arrival” into “Grand Theft Autumn/Where Is Your Boy” into perennial crowd pleaser “Saturday.” The record sags a bit in the middle, but late-sequenced gems like “Grenade Jumper” and the fantastic re–recorded version of “Calm Before The Storm” (first heard on Evening Out) ensure you won’t be skipping through cuts for long. Nonetheless, if the album has a flaw it’s inconsistency, a problem that FOB would later overcome with Grave’s near-perfect 2005 follow-up and breakthrough release, From Under The Cork Tree.

But those forgivable failings aside, Grave offers vast quantities of all the key FOB ingredients: Stump’s commanding vocals, paired with Wentz’s bitter-yet-humorous lyrical sensibilities (the lines “your makeup looks so great next to his teeth” and “I wouldn’t piss to put you out” both occupy the same song), with a backing score as exciting as New Found Glory in their heyday. It’s a potent combination, and as evidenced by the declawed radio pop that has characterized FOB’s more recent releases, the formula was so volatile that it has proven difficult to sustain over time. It’s all the more reason to love Grave, and thank the heavens that in the end it was Fall Out Boy, and not Simple Plan, who went on to conquer the world