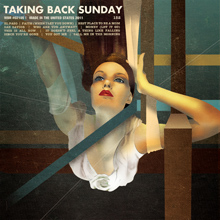 On some level, this still doesn't feel real. The 2003 split of Taking Back Sunday was so well publicized, so gossiped about and so downright bitter that even the most hardcore TBS fans had long ago given up the notion of guitarist/vocalist John Nolan and bassist Shaun Cooper reconciling with frontman Adam Lazzara, guitarist Eddie Reyes and drummer Mark O'Connell. So even though the fivesome have buried the requisite hatchets and completed a new album together (their first in nine years), there's still an air of trepidation surrouding the whole proceedings. The two most commonly held thoughts in the band's fanbase (and, really, the scene at large) right now are “I hope this sounds like Tell All Your Friends,” and “I hope this doesn't suck.”

Well, the bad news first: This album is most definitely not Tell All Your Friends II: Electric Boogaloo. That said, it most assuredly doesn't come anywhere close to sucking, either. The excitement of early Taking Back Sunday was that they were good songs elevated by truly great performances. Ironically, as the band progressed through a series of guitarists and bassists over the next three albums, the songwriting went from good to great, but the performances began to lack that spark that made TAYF so special in the first place. Taking Back Sunday definitely benefits from both sides of the equation, as there's no question Lazzara, Reyes and O'Connell have improved dramatically as musicians over the past decade, and Nolan and Cooper have brought in that much-needed lightning which sets some of these tracks off like no TBS song has since the early days, specifically the crushing opener “El Paso,” the TAYF vibe of “Best Places To Be A Mom” and the monstrous, fist-pumping chorus of “This Is All Now.”

Nolan and Cooper's time in the more moody, piano-based outfit Straylight Run have added a new dynamic to the group, too; the keys feature heavily in the album's best track, “Since You're Gone,” which has Lazzara bellowing a simple chorus of “I'm sorry, I'm sorry/Come back, come back” over Reyes' chunky power chords and Nolan's pinpoint plunking. Lyrically, Lazzara has lowered his guard now that the OG TBS are back together, as it would be easy to intrepret this track as directed toward ex-fiancee Chauntelle DuPree (“This is nothing like I pictured/Forgot what it was like to miss you/There's no one to take for granted now you're gone”). The singer continues his more open, honest, direct form of lyricism on the fast-paced rocker “You Got Me,” which finds him singing about his current wife, Mischa, and her 2008 pregnancy. “I was there when you were worried/I was there when you were sick/I was there when you were positive, 'This is not happening,'” he sings in the song's second verse, before recalling, “You said, 'It's my body, boy/Not your body/Look here, for christ's sake we're just kids'/You didn't want to do it alone/So who's to say you'd have to do it alone?”

The album-closing, piano-led, slow-burning power ballad “Call Me In The Morning” carries the album's thickest Straylight Run influence, as Lazzara and Nolan harmonize “Call me in the morning/Call me when you're home/I know what you've been through/Don't let go,” before the latter starts shredding his vocal cords on the final go 'round, bellowing, “I don’t know where we're going/But I know where we've been/We've been hiding from each other/We've been hiding from our sins.” While the faster-paced tracks on the album are fun and jaunty listens, it's these moments where it's obvious that the Nolan of old and the Nolan of Straylight Run can come together without making things sound forced or awkward.

While Taking Back Sunday carries its share of extraordinary moments, there are a few critiques that can be levied against it. “Faith (When I Let You Down)” has a smokin' half-time chorus, but Lazzara's vocals in the verses sound a bit hollow and distant (and the “whoa-oh” gang vocals sound lifted from any track off the last 30 Seconds To Mars record). The drum tone in the verses of “Who Are You Anyway?” and “This Is All Now” is a curious choice, as it marginalizes O'Connell's muscle and lacks any oomph. “Money (Let It Go)” feels like the band trying to aim for the advanced musicianship level of the Fred Mascherino/Matt Rubano-era of TBS but missing the mark. “It Doesn't Feel A Thing Like Falling” has a really cool opening guitar riff that echoes Jimmy Eat World's “Futures,” but the chorus gets repetitive and loses its impact pretty quickly. Even still, the song is saved by an absolutely fantastic bridge, with Lazzara crooning, “I want to fall back in to all we used to represent/Wash my filthy hands/Wash my filthy hands.”

That recovery is indicative of the whole album—even songs that aren't up to par with the others generally still have one or two really strong moments that make you overlook the mistakes. “Sad Savior” is a pretty basic 6/8 rocker that doesn't feel too special until you get to the last chorus, where you can practically see Nolan's neck veins bulging as he shouts, “You don't have to pretend to be an orphan anymore/You don't have to pretend to be important anymore.” It's those kind of moments that will surely deliver goosebumps for longtime TBS fans.

Is Taking Back Sunday the best album these five men can write together? Absolutely not. But now that the albatross is successfully off their necks and it's been proven that they can still create vital, relevant rock music, we all get to sit back and see what they can come up with next. And if you ask me, that's when things start to get really exciting.