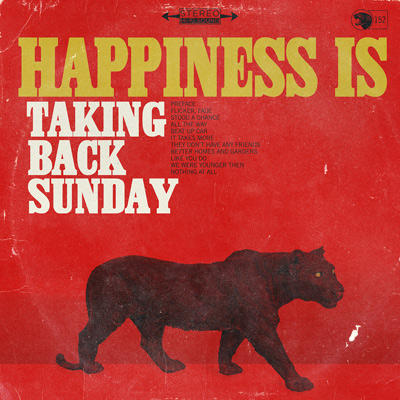 Happiness Is is kind of a big deal for Taking Back Sunday: It’s their first record on an independent label in a decade; it’s the first time they’ve worked with Mike Sapone (best known as Brand New’s longtime engineer/producer), who produced five of Happiness Is’ 11 tracks; and most importantly, it’s the third TBS album to feature the band’s “classic” lineup of frontman Adam Lazzara, guitarist/vocalist John Nolan, guitarist Eddie Reyes, bassist Shaun Cooper and drummer Mark O’Connell. With Happiness Is, this lineup has now released more music as a unit than any other version of TBS, which is a pretty monumental accomplishment since many of us assumed the reunion with Nolan and Cooper would never happen.

What’s really interesting, though, is how with all of those changes and new experiences, Happiness Is feels more like Taking Back Sunday ca. 2004 than anything else the band have done since that year’s Where You Want To Be. Sapone’s involvement doesn’t do much to distinguish the songs he produced from those Marc Jacob Hudson (Saves The Day, the Swellers) did. It’s a comfortable album that doesn’t contain any sort of crazy sonic left turns (outside of a skippable orchestral intro). Lead single “Flicker, Fade” is such an instantly memorable anthem that it gives your ears a feeling of deja entendu [the actual meaning, not the Brand New album —French 101 ed.] because it sounds like something the band were thrashing their way through a decade ago.

That’s not to say the band are stuck in nostalgia mode; judging by Lazzara’s lyrics, TBS are very much constantly maturing, with the singer digging deeper than he ever has on the incredible album standout “Better Homes And Gardens.” Instead of trying to tell you what the song is about, I’ll let Lazzara do the dirty work: “When you took that ring off/I sat there stunned/Parked out in my car/Surprised by what you’ve done/The courage that must’ve took left me utterly speechless/And though it came as no surprise, I still couldn’t believe it.” But Lazzara’s not taking it lying down; he fires back in the song’s bridge, crooning, “So just go on/That house that you hate/That house that we bought/And failed to make/It was all for nothing/It was all a waste/And now you’ll never be happy.” Brutal.

Along with “Better Homes And Gardens,” the record’s most memorable moments are its most aggressive ones: The minor-key “Beat Up Car” has small spurts of vocal tradeoffs between Lazzara and Nolan leading into a propulsive chorus that bounces between time signatures as a high-pitched guitar lead and deliberately uncomfortable vocal harmonies appear throughout. It segues nicely into the five-minute “It Takes More,” one of a number of ballads on Happiness Is, but easily the most memorable due to some haunting piano and an explosive final chorus at the three-minute mark that just keeps chugging, adding in new, interesting elements from howled backing vocals to what sounds like some guitar backmasking to a sound collage that is kindred spirits with the Beatles’ “Revolution No. 9.”

While Taking Back Sunday’s sizeable fanbase likely can’t agree on which TBS record is their all-time best (New Again tends to win out in the AP office, internet commenters be damned), after repeated listens to Happiness Is, it’s clear this record isn’t it. It’s a good record, to be sure, but that’s to be expected by TBS at this point: These guys are professional musicians who have sold a few million records and toured the world countless times over. Unfortunately, a “good” record just isn’t good enough anymore. Is it wrong to expect more?