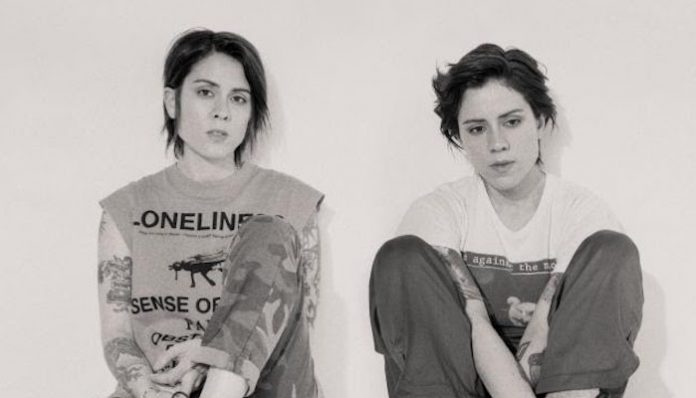 It’s true that Canadian indie-pop band Tegan And Sara are experiencing the pinnacle of their musical career. Most first became aware of the Quin sisters in 2014 when they recorded The Lego Movie theme song, “Everything Is AWESOME!!!”—which earned them an Academy Award nomination for Best Original Song the following year. Since then, they’ve leaned into their pop, synth-heavy sound. The duo capture the sort of raw emotions that seem so flagrantly absent from the genre. It’s a talent that goes under appreciated in a time when everyone claims to be creating “pop.” They make use of it in their new album, Hey, I’m Just Like You.

After a three-year gap following the release of Heartthrob in 2013, they bared themselves in their 2016 album, Love You To Death, flawlessly. Tackling issues such as heteronormativity (“Boyfriend”) and LGBTQ+ love (“Stop Desire”), the Quin sisters managed to bring an energetic and upbeat sound to something so heavy. With each release, we’ve seen Tegan And Sara refine their sound and mature as artists. But they’ve decided to harken back to their teenage days with their new album.

It was a pile of cassette tapes containing songs the two had written between the ages of 15 and 17 that inspired Hey, I’m Just Like You. Having two decades’ worth of professional experience as recording artists, they’ve mastered the techniques that it takes to bring their past into the present. But that’s not to say that the sisters forgot to include sonic qualities derived from the late ’80s and mid-’90s—when they were adolescents.

“Hold My Breath Until I Die” delivers three repeating, fuzzy chords laid as backsound that’s reminiscent of ’80s synth. Adding nostalgia, the duo vent their juvenile frustration and confusion that centers on a possible love interest. Heartbreak is translated into “I’ll Be Back Someday,” with angsty, wavering vocals that could crack a window. The sisters plug into amplifiers at the beginning and add fast guitar strumming. It heightens the delivery of the lyrics: “I wanna call and ask ‘What’s up?’/Go to dial, but then I stop/Till the end my friend/Oh, what a lie.” It’s a punk anthem that deviates from their discography.

This middle-finger approach is a sound that seems deserving of an EP, if not an album. We’re in a time where most artists crossover into whatever genres they please, with a list that includes Panic! At The Disco, Iggy Pop and, more recently, Lil Nas X. So for Tegan And Sara, it’s best to act accordingly.

The sisters slow down their beat and dwell on a heartstring-plucking sound with “Please Help Me” and “Keep Them Close ’Cause They Will Fuck You Too.” Switching out their electric guitars for acoustic, they turn inward. They search for healing and answers for where they went wrong. Lyrically, it’s the comedown from the high, where the sisters are picking themselves from off the ground. Without given much context, one can easily join in the audio novella-esque album and stay for the ride of emotions.

As queer sisters living in the #MeToo movement, they leave their listeners with a track that reminds them of the strength that each person has. In “All I Have To Give The World Is Me,” they express that message, and it needs to be said now more than ever. With the advent of social media and the polarizing power it holds, our society is losing grasp of their sense of identity in exchange for internet fame. They sing, “No one’s very real today/All I have to give this world is me, that’s it.” Tegan And Sara include this sentiment and weave it in the self-value they’ve discovered in heartbreak.

Hey, I’m Just Like You proves, yet again, that the sisters have mastered a rather complex formula. Tegan and Sara channel love, heartbreak and growth into a light, sophisticated sound that still manages to be memorable. That’s not be said for most of the tracks topping the Billboard Hot 100—where listening is more about using and abusing. Subjects surrounding the heart often lead to ooey-gooey lyrics and saccharine beats for songwriters. And the result are songs sounding like your friend who can’t stop talking about their ex.

Tegan And Sara have been honing their craft since the beginning, when they were teenagers in high school. Listeners have known the duo since Under Feet Like Ours, their 1999 debut album. But Hey, I’m Just Like You gives dedicated fans a deep dive into their start as songwriters. More so, we follow their journey into womanhood and how love shapes it—it’s an educational tale needing to be heard.

Hey, I’m Just Like You dropped Sept. 27 via Sire Records, and you can listen to the full album here.