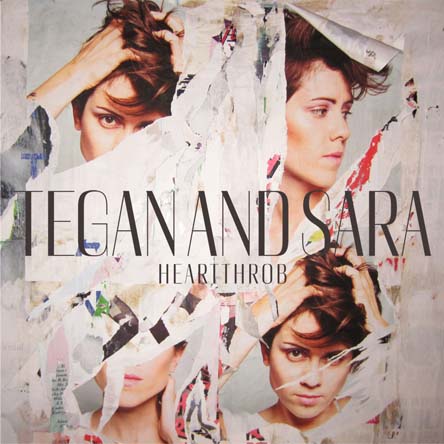 This review originally ran in AP 295.

When AP featured Tegan And Sara in last year’s Most Anticipated special, Tegan Quin said they were listening to Tom Petty, Kate Bush and ABBA while working on their seventh album. If Heartthrob is any indication, they listened to a lot of ABBA. Instead of acoustic guitars aplenty, there are ’80s-infused dance beats. Instead of taking us on an emotional roller coaster full of self-deprecating turns, they give us unabashedly pop songs with airy vocals and upbeat lyrics. Tegan And Sara are no longer singer/songwriters who write pop music. With Heartthrob, they’ve become pop artists. The duo’s strong suit has always been songwriting, and this still comes through on Heartthrob (see standout tracks “How Come You Don’t Want Me” and “Goodbye, Goodbye”). They’ve changed their sound, but they can still convey swells of emotion (sometimes a bit too much, like on the somewhat whiny “Now I’m All Messed Up”) through simple, catchy lyrics. Even for fans who won’t like Heartthrob—and there are sure to be a few—you’ve got to give the sisters credit for taking such a musical leap. (After 14 years, they’ve earned the right to do what they please.) But after six albums of damn good material, especially So Jealous and The Con, we wonder why they felt the need to make such a drastic change. Tegan And Sara may pull off the pop-star act with Heartthrob, but is it wrong to hope it’s not permanent?

“How Come You Don’t Want Me”