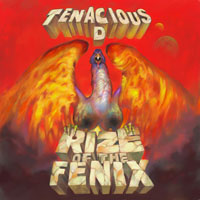 Rize of The Fenix

In the works since 2008, Rize Of The Fenix kicks off on a remarkably dated note, with Tenacious D frontman Jack Black intoning, “When The Pick Of Destiny was released, it was a bomb/And all the critics said that the D was done.” True, the duo’s feature-film debut tanked at the box office, but that was six years ago. In that time, the D’s core fanbase graduated from college and quit smoking weed. The humor practiced by Black and cohort Kyle Gass hasn’t evolved much since then; Fenix is loaded with classic-rock-aping material which simultaneously admires and lampoons everything from Star Wars (“Deth Starr”) to organized religion (“Throwdown”). Black’s vocals are appropriately theatrical, punching up otherwise rote material such as “Roadie” and “39.” 2001’s Tenacious D was memorable not just for the music but for the between-song skits, and Fenix could benefit from more breaks (there are only two). The trio of “Rock Is Dead,” “They Fucked Our Asses” and “To Be The Best”—all barely songs to begin with—don’t even total four minutes. Wouldn’t that time be better spent letting JB and KG go at one another?