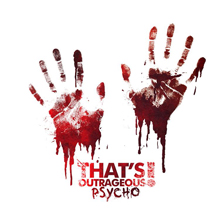 Sometimes, a band’s strength is revealed not with a first big break, but in a persevering second—and That’s Outrageous! nail it. With only a hotly circulated demo recording to their name and not a single gig under their belt, the Poughkeepsie group was picked up by Rise Records in 2011. They released their debut full-length Teenage Scream, only to be dropped, but quickly picked up by the better-suited InVogue Records imprint. But the combined forces of an exodus (and rejoining) of band members, along with additional drama threatened to suffocated the band prematurely. Fortunately, on their second release, Psycho, That’s Outrageous! give a bloody middle finger to the bullshit with a  surprisingly complex collection of songs, showing off a knack for unparalleled terror-pop. The title track is practically a complete package itself, with the duality of screams and sexualized pop vocals playing evenly. “Obliviate” makes the band’s trademark jolting, synthetic sound bear down on haunted keyboards while the kick drum pierces through. “Vyvanse Trance” and “Home Invasion 101” are throwbacks to the watery, 8-bit, screamo-esque disco pop of a half-decade ago, the kind of thing that could take That’s Outrageous! into an even more dangerous territory: the overly friendly world of radio.  Psycho leaves a lot for the listener to process, but for the band’s fans who have stuck with them through so much turbulence in so little time, this could be the record they’ve been waiting for all year.