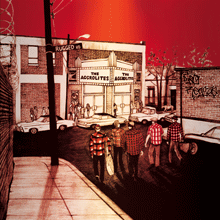 As it stands, Rugged Road is bona fide dirty reggae laced with a handful of dub reverberations, delivering a stripped down version of the Aggrolites’ signature sound. The focus of these songs is quintessential reggae: wailing organ, upstroked guitars and boot-stomping beats. However, standing in the shadow of the band’s previous work, Rugged Road falls short of developing its own unique voice. To an unfamiliar Aggrolites fan, songs on this record could mistakenly be attributed to previous albums. A number of tracks are forgettable, especially considering seven out of 10 tunes are instrumental. Conversely, the city-by-city shoutout “The Aggro Band Plays On” does dial into the band’s best quality: dance-worthy reggae that most likely translates well into their live show. Although this songwriting technique is familiar to the Aggrolites (their last album, 2009’s IV, also had a similar tour anthem), it’s a nice contrast to an otherwise redundant record.

“The Aggro Band Plays On”