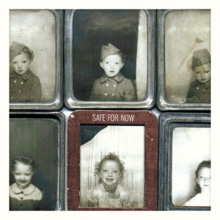 While the American Scene most frequently associate with young West Coast startups like the Story So Far and are releasing this full-length on the pop-punk-heavy Pure Noise Records, Safe For Now dashes away any preconceived notions. The album is an assured, confident statement with far greater musical and emotional depth than one might expect from TAS's occasionally homogenized scene, finding the band taking a giant leap forward from both 2011's split with Daybreaker and their own mini-album, By Way Of Introduction. The band blend a loving mix of early-2000s emo into emotionally weary, well-crafted pop-rock in a way that may finally leave behind oft-mentioned comparisons to the Dangerous Summer.

If the American Scene have any musical contemporaries at this point, they'd be limited to the textured, thoughtful approach of effects-pedal-loving, emotionally versatile acts like Seahaven and Daytrader. But they're just as rooted in the sounds of a decade past, with shades of the Jealous Sound's ambitiously big, pretty melodies (“Fifth And Natoma”) and Hot Rod Circuit's playful, nimble guitar work and modest vocals (“Blood Orange”) coloring Safe For Now to an enjoyable—while not necessarily derivative—degree. Frontman Matt Vincent, who largely focuses on the tribulations of love and love lost, has a voice that would be cornier in the wrong context, but his expressive, punctuated delivery works wonders within TAS's framework.

While highlights abound, from the enjoyably lazy hook in opener “Just Say It” to the perfectly pensive “Used To You,” the record really hits its stride in the middle: The excellent trifecta of “Fifth And Natoma,” “Shape Shifter” and the Brand New-influenced “The View From Here” (scope that “Degausser” strum) is wildly engrossing. This part of the album grows increasingly darker but remains diverse and culminates perfectly in the chillingly tense “The View From Here.” If the band takes this sort of direction on their next release, it'll be an instant classic. But that's not to discount how much thought and care are put into the rest of the songs on Safe For Now, which establishes the American Scene as one of the strongest bands of any scene they may associate with.

“The View From Here”