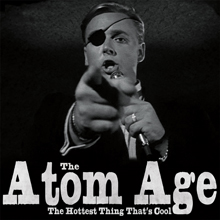 A strange dilemma is faced when listening to The Hottest Thing That’s Cool, the new album by Oakland, California’s the Atom Age. When one band sounds so much like another band—and even admits that without said band, they probably wouldn’t exist—it’s hard to completely enjoy them. Luckily, in this case, the band being copied are the unforgettable San Diego horn-infused rock band Rocket From The Crypt, who broke up on Halloween of 2005. Because it appears that RFTC won't be reuniting anytime soon (a 2011 guest spot on the kids’ TV show Yo Gabba Gabba! has been their only hint at action), there’s more than enough room in the underground music scene for the Atom Age—who, to be clear, sound almost identical to Rocket. We’re talking right down to the song structures, horn placements, choreographed background vocals and handclaps and a lead singer, Ryan Perras, who might be just one register higher than RFTC head honcho John Reis.

Lyrically, the Atom Age don’t have quite the same sharp style of humour employed by Reis, instead opting for more obtuse material like the profanity-laced “Better Unknown” and the rather obvious “Bad Girls Go To Hell.” Still, energy-wise, the Atom Age match any of the RFTC output, perhaps even surpassing their idols in pure adrenaline and speed (album opener “Dig The Future” is probably the best song RFTC never wrote). Think Voodoo Glow Skulls-style speed, but done to RFTC songs. Despite being a copycat band, the Atom Age still earn a hearty score for The Hottest Thing That’s Cool. Any poor souls out there who’ve never heard Rocket From The Crypt (and are still reading this) can go ahead and add another star to the rating.