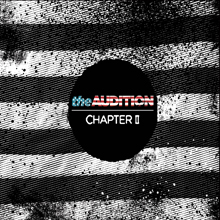 Chapter II is a fitting title for the Audition’s new EP, as it represents the second stage of the band’s newly independent career after splitting from Victory Records. But it’s also a bit of a misnomer: On these six songs, the Chicago quintet continue to explore the sultry pop sound they developed on 2008’s Champion. That disc went a long way in helping the group stand out from the overcrowded scene in which they came up, but it’s also a sound they’ve clung to like a security blanket ever since. This would have been the perfect opportunity for the band to emerge with a slightly suped-up and tweaked take on the genre as they lead the charge to reclaim their spot in the scene. But instead, songs such as “Who Do You Think You Are” and “You Make Me Sick” feel a little like leftovers from the Champion sessions. “You Gotta Believe” is a nice change of pace, the lone mid-tempo ballad in a sea of hi-hat-heavy, dance-tinged pop-rock. Thankfully, the one thing that hasn’t changed is vocalist Danny Stevens, who’s clearly got the chops for this sort of white-boy soul. As long as he’s leading the band, the Audition still have a fighting shot at being relevant.