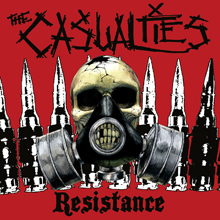 It’s telling that the Casualties are touring behind their new full-length, Resistance as the opening act for GWAR. Since forming more than 20 years ago, the New York City outfit have always felt like a Saturday-morning-cartoon caricature of vintage punk—in other words, the overblown, spiky-haired stereotype of punkers plucked straight from your grandma’s bad dreams. Accordingly, old ladies are probably the only people on earth who might be intimidated by Resistance. To its credit, the album doesn’t try to tweak the Casualties’ tried-and-true formula, which in recent years has veered toward the metal-tinged Brit-punk of ’80s stalwarts like Broken Bones and English Dogs. Frontman Jorge Herrera, the band’s sole remaining original member, has filed his larynx down to a fine grain of sandpaper, and shout-alongs like the Motörhead-esque “Warriors On The Road” and the chugging, Oi!-injected title track are lean, gritty, bleakly catchy and painfully earnest. That said, even at their speediest, they’re tired. In the age of the Occupy movement and the Arab Spring, the album’s rage against barbed wire and brick walls sounds reductive, if not downright silly. But that’s okay. Cartoons can be deep, but sometimes they’re just dumb fun—especially when the characters don’t seem to realize they’re in one.

“Warriors On The Road”