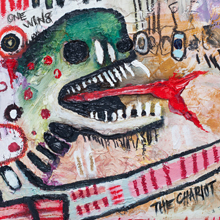 When The Chariot’s 2010 album Long Live was unleashed, it cemented the band as leaders in utter originality and chaotic passion. One Wing continues on the Georgian group’s uncompromising path, electing this time to include songs that expand upon the band’s throw-a-blender-into-a-food-processor sound. Wiry, twisting riffs are fused with Josh Scogin’s rabid shrieks and howls (see the unassumingly titled “In” for an example of how truly sketchy these guys can sound), but it’s tragic piano ballads (“Speak”), downtuned sludge swampers (“Tongues”), fucked gospel (“Your”) and even ragtime-to-noise-changeups (“And”) that makes One Wing a more complete album than Long Live. The Chariot have always had a reputation of being completely unhinged and unpredictable when they play live. For the first time on album, the downright scary energy they exude onstage has been properly harnessed. Now that One Wing is pouring out of the speakers and scaring anyone with earshot, those with heart conditions or prone to epileptic fits should probably skip this one.