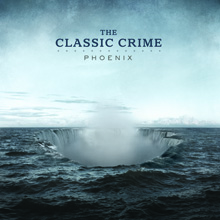 Give Seattle quartet the Classic Crime credit: They’re not afraid of a little drama. They “wander through the desert under the cover of night looking for a fire that bring us to life,” as they explain on “Young Again” and stand on “The Precipice” where “piece by piece, I build the cell I’m in, but I only stay here long enough to write the saddest song.” Somewhere, Morrissey’s feeling verklempt.

Despite brooding, over-the-top mopiness that would make Edward Cullen seem cheery, the arrangements are elegantly tuneful with an atmospheric sweep and production as crystal as the water in the Caribbean. Whatever the tone, they can craft a couplet and singer Matt MacDonald has a boyish tenor that’s keenly matched to the skygazing searcher full of questions evoked by the lyrics. You can almost hear his wide eyes and apple cheeks as he attests, “I’ve seen the face of God through miles of black ice,” on the surprisingly deft road paean “What I’d Give Up.” (No steel horse metaphors here.)

The band’s fourth full-length, Phoenix, delivers crisp, somewhat shiny rock that sounds like Matchbox 20 if Rob Thomas had developed a sweater fetish and an adoration for the weepy spirit of second-wave emo acts like Further Seems Forever. It’s really not too far removed from their last two albums for Tooth & Nail, 2010’s Vagabonds and 2008’s The Silver Cord. It’s a bit more epic and widescreen, like they felt there was something to prove after leaving the label and funding this release through Kickstarter. That jeopardizes the charm that came from their more understated efforts, such as 2007’s acoustic Seattle Sessions EP and Vagabonds’ showstopping “Happy Nihilist.” Sadly there’s nothing here as arresting as the latter track or its title track companion.

Again it seems the best track is an acoustic track (colored with a distant peal of electric), penultimate track “City Of Orphans.” It’s very much the apogee, and like “Happy Nihilist,” offers a well-articulated window into the album’s themes of loneliness and dispossession. “We’re all running away, we’ll drain you dry of all semblance of life, we don’t give we just take,” MacDonald sings. It’s not quite “Born To Run” but that’s the idea. It’s a similarly uplifting statement of shared heartbreak and hope that succeeds in part because the understated arrangement allows the oversized sentiment have the stage. While the music is well crafted, it too closely mirrors the foreboding storm clouds and tense shadowy fear that runs through the lyrics. The whole “but my amps go up to 11” emotionality can be exhausting.

That said, youth is about being knee deep in it. Undoubtedly for many of TCC’s fans, the gothic lyrical undertone and plaintive, swooning heart-on-the-sleeve earnestness of Phoenix will represent another notch in the volume knob. After eight years together, they have proven very good at what they do. We’ll quibble with the melodrama, but this is finely assembled album that follows the band’s prior trajectory and forward momentum. Yet it feels like a lost opportunity to pull things in tighter and work the intimacy rather than mounting a bigger production.