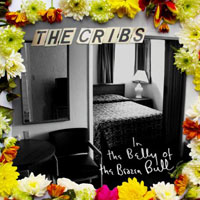 In The Belly Of The Brazen Bull

After getting a pretty substantial profile boost thanks to the addition of former Smiths guitarist Johnny Marr (who recorded and toured with the group for three years), U.K. indie-punk band the Cribs are back to being a trio for their fifth album, In The Belly Of The Brazen Bull. We’re not one to entirely lament Marr’s absence (after all, the Cribs’ best work actually came before he joined, on 2007’s Men’s Needs, Women’s Needs, Whatever), but it seems like his 2011 departure left the band stuck in neutral. Bull drags on with minimal memorable hooks and far too much guitar feedback. The tempos are slow, the performances lack energy, and when the band finally stumble onto a few strong melodies toward the end of the album (“Uptight,” “Pure O”), it’s too little, too late.