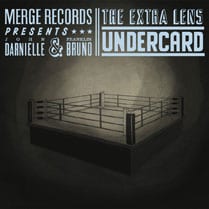 John Darnielle would be a rich man if every wordy folkster who built a career on his M.O. paid him royalties (cough, Colin Meloy, cough). Entering decade No. 3, the man best known as the Mountain Goats teams with singer/songwriter and renowned music critic Franklin Bruno. The collaboration doesn’t stray far from the Goats’ path. The songs tend towards the minimal, gentle guitars and nasal singing Darnielle does so adeptly. Bruno applies piano flourishes and occasional shards of electric guitars to color in between Darnielle’s lines.

The pair’s approach differs little from their previous full-length Martial Arts Weekend (released in 2002 under the name the Extra Glenns). While some songs feel disjointed and hastily patched together (a pitfall of two musicians collaborating via internet), their respective talents triumph over the course of the album. Darnielle’s distinct guitar style highlights “Ambivalent Landscape Z” and the winsome “Tug On The Line.” Bruno’s piano is a welcome addition throughout; on “In Germany Before The War,” he gives the song a slow, Duke Ellington jazz feel. It perfectly befits Darnielle’s smoky, whispered vocal delivery. Though much of the musical accompaniment is kept to a bare minimum, the ambience generated is panoramic. With songs this skeletal, that is quite a feat.

Though The Extra Lens at times musically dazzle, Darnielle is best known for his prowess as a storyteller. On Undercard, he tells the tales of the everyman, from “guys in Bermuda shirts who are chewing on cigar stubs” (“Cruiserweights”) to the man who is “indescribably wealthy every time it rains.” While much of contemporary music fixates on flash and bang, it’s refreshing to hear emphasis on what the singer is saying. With a lyricist this gifted, that more than suffices.