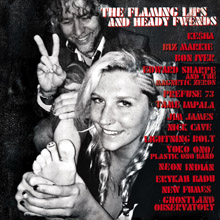 The Flaming Lips And Heady Fwends

As if the word “Fwends” wasn’t enough of an indication, the first song on The Flaming Lips And Heady Fwends—“2012 (You Must Be Upgraded)—hints that the album is going to fall squarely on the Lips’ impish side. Impish and annoying. Like the Mr. Mxyzptlk of indie rock, leader Wayne Coyne uses the grinding, hookless mess of “2012” as a flimsy excuse to throw together guests Ke$ha and Biz Markie. It’s about as compelling as watching a kid force his Barbies and G.I. Joes to hump. Things don’t really recover from there; the wispy, spacey “Ashes In The Air” pushes Bon Iver through David Bowie’s airlock, and predictably, the song runs out of oxygen halfway through. Tame Impala valiantly tries to salvage the sci-fi theme in “Children Of The Moon,” but they can barely be heard over waves of whale-fart synths. Even unmistakable voices such as Nick Cave (“You, Man? Human???”) and Erykah Badu (“The First Time I Ever Saw Your Face”) are rendered unrecognizable, smothered under mudslides of vocal effects, watered-down ambience and what seems to be a sincere effort to just totally fuck with them. Surprisingly, its Yoko Ono who manages to overcome the dull, sub-Gorillaz dub of her track, “Do It!” mostly by getting crazier than Coyne could ever hope to be. By the time Neon Indian are called out to beat the dead horse in the aptly named, utterly forgettable “Is David Bowie Dying?” Heady Fwends has racked up about one song’s worth of decent material—only none of it is in the same song. Maybe Coyne thought that putting “Fwends” in the title might buy him some leeway in regard to the album’s unfocused, half-assed frivolity. Instead, it just makes it worse.