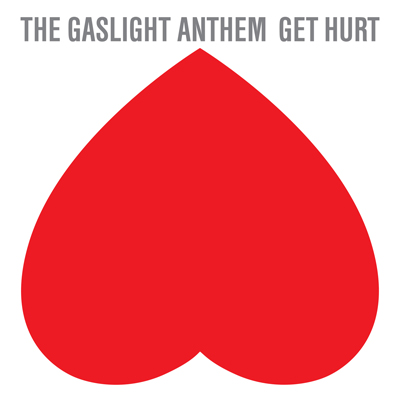 All eyes are on the Gaslight Anthem to see what they come up with on album No. 5, with the band in some pre-release interviews telling fans to expect things they've never heard before. And while that's pushing it (this is a Gaslight album, plain and simple), there are some excellent moments of musical stretching out on Get Hurt.

Unfortunately, things don't get off to the best start, with all-important opener “Stay Vicious” showing off the stiff and expressionless snare drum sound front and center, and a weird guitar tone quickly following it up. Production qualms aside, it's a decent opener, but what really sells the album comes next. Tracks two and three, “1,000 Years” and the title track, respectively, absolutely nail it. The former is a fun, groovy number that has the band's melodies and songwriting finesse in full form: The way it builds at its conclusion is classic rock, and classic Gaslight. The title track gets subtle and subdued, with some nice ’80s touches on the production keeping it catchy, smooth and memorable (shades of frontman Brian Fallon's the Horrible Crowes project abound). One of the album's strongest tunes, the incredibly bitter “Underneath The Ground” also utilizes subtlety in a way that shows these guys are learning with age, the last minute-and-a-half of the song rising ever so slightly with smart percussive and production touches; it's the little things that provide the hugest impact.

There's no arguing that the vibe throughout some of these songs is new for Gaslight, though. It's still rocking but it's less Bruce Springsteen and more KISS—and we're talking forgotten-pop-gems-off-of-Unmasked KISS. But somehow, Gaslight turn what could be an incredible insult into something that works so well mashed up against the harder-hitting tunes on Get Hurt. And while the track order pacing on last album Handwritten was a bit of a risky move on an otherwise stellar album, here the band places the ups and downs where they should be, bombastic numbers like “Rollin' And Tumblin'” and the Heart-tastic “Stray Paper” picking up the rock right when it's needed.

Get Hurt is an excellent album from an important rock band. They're important because so few hoist the flag of rock ’n’ roll as proudly and explicitly as the Gaslight Anthem these days. And, excellent because it's excellent: you're going to be hard-pressed to hear a better rock album this year, and this easily stands as one of the band's best collection of tunes.

Get Hurt is really about the love of rock ’n’ roll, which is what Gaslight's best love songs have always really been about. Fallon sings, “I still love rock ’n’ roll,” on this album's “Stay Vicious.” But he didn't need to say it: The songs on Get Hurt do all the talking for him, loud and proud, crashing and bashing into the night, taking heartache and turning it into triumph. Pure rock ’n’ roll.