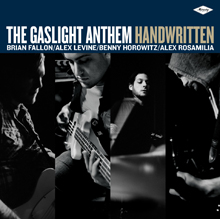 This review originally ran in AP 289.

Thank goodness for the Horrible Crowes. The side project of the Gaslight Anthem’s Brian Fallon and his erstwhile guitar tech Ian Perkins created one of 2011’s best albums in Elsie, giving Fallon an outlet for his darker, moody side. It was this subdued side that made 2010’s American Slang just good instead of great—there was a sense of precision that overrode the energy of the band’s earlier albums, making for an excitement-free listen (cf. Against Me!’s White Crosses).

Fortunately, Handwritten eschews that formality and gets back to the grittiness of Gaslight’s debut album, Sink Or Swim, as well as the powerful lyrics of 2008’s breakthrough, The ’59 Sound. Plus, thanks to the expert production of Brendan O’Brien (Bruce Springsteen, Pearl Jam—y’know, Brian Fallon’s favorite artists of all time), the record sounds goddamn phenomenal. When auxiliary instruments such as harmonica (“Keepsake”) or mandolin (“Here Comes My Man”) pop up, they’re blended into the mix perfectly, doing what they’re supposed to do—accent the song.

The songs themselves sound thicker, too, thanks to the addition of Perkins on third guitar (he’s technically the band’s touring guitarist, but he did play on Handwritten, as well). The first single, “45,” is a bona fide ripper, possessing a chorus so instantly memorable (and a guitar tone so revved up), it will surely get crowds moving. Its deep-cut sequel, “Howl,” is even faster, a two-minute stomper with a chorus comprised solely of “Ay-ay-aaaay!” Shakespeare it’s not, but it demonstrates Fallon’s knack for quality hooks.

But the truly exciting stuff comes when the band step outside of their Americana-punk comfort zone but keep up the intensity (“Keepsake,” “Biloxi Parish” and the absolutely incredible “Too Much Blood”). All three tracks tap into more of a Southern rock/gospel vibe, allowing lead guitarist Alex Rosamilia to show off a little bit. The riff the band deliver on “Too Much Blood” is downright sinister, and coupled with Fallon’s Tom-Waits-as-soul-singer vocals (“I ain’t no angel, but I got nothin’ to hiiiide”), it will send chills down your spine in the best possible way.

Fallon still finds time to slow things down at the end of Handwritten. “Mae” is reminiscent of American Slang’s closer, “We Did It When We Were Young,” just at a slightly faster clip, and the final song, “National Anthem,” is a gorgeous acoustic ballad, reminiscing on life, love and God. “So take what you need now, honey/And do what you like/Don’t worry about me, mama, I’m all right,” he croons over a soft string section, and you can’t help but believe him. Fallon has said in the buildup to Handwritten’s release that he wasn’t sure if he would ever be able to write another Gaslight Anthem song after American Slang again. Well, here are 11 shining examples that prove him wrong.