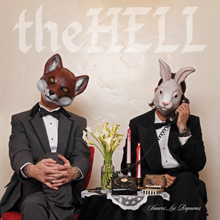 Matt Skiba's been a pretty busy dude in recent years. While his main squeeze, Alkaline Trio, continue to tour frequently and release albums at a steady pace, he also released a solo album of demos (appropriately titled Demos) on Asian Man Records in 2010, and in February 2011 formed the Hell with drummer Atom Willard, a man whose resume reads as a who's-who of contemporary rock and punk (Angels & Airwaves, the Offspring, Social Distortion, Rocket From The Crypt, et al). Of course, the Hell have almost been completely overshadowed by the announcement of another Skiba side project, Matt Skiba & the Sekrets, comprised of the band's namesake along with AFI's Hunter Burgan on bass and drummer Jarrod Alexander, who currently hits for My Chemical Romance. With that all-star lineup being announced literally the day before the Hell's debut EP, Suave Les Requins, was slated to drop digitally, and you have to wonder if Skiba was sweeping the Hell under the rug a little bit. Thankfully, these four songs are nothing to scoff at, and deserve attention.

Since Suave Les Requins (or “Save The Sharks”) was created entirely by Skiba and WIllard, it's no surprise that it sounds like the two bands those individuals are best known for: Alkaline Trio and Rocket From The Crypt. You won't find any of Demos' bland, Macbook-recorded throwaway tracks here; these four songs are energetic, angry and with a healthy dose of swagger. The chorus of “Gasoline” feels like a lost Good Mourning track, whereas “R.R.R.” has the crunch and heft of Circa Now-era RFTC—you could toss a horn section on top of the pulsating rhythm and it wouldn't feel out of place at all. “Vas Te Faire Foutre” (loosely translated, “Go Fuck Yourself”) has a sinister, thick riff that's indebted to RFTC's ballsy rock, whereas “Nowhere Left” is classic Trio pop-punk, with an active bassline, an easily sing-alongable “whoa-oh” chorus and the same frantic barre chords that Skiba built the Trio's name on in the late ’90s.

It's hard to really know exactly where the Hell will go next, as Skiba and WIllard seem firmly in their comfort zones here and the EP's short runtime (four songs in just a shade over nine minutes) doesn't leave much room for experimentation. The EP feels loose and fun, but almost too thrown-together—Skiba's vocals leave a little to be desired in terms of studio polish. We're not asking for them to be ultra-slick like on Agony & Irony or anything, but these sound like they were first takes, especially “Vas Te Faire Foutre,” which finds Skiba's voice a bit too flat, even for punk rock. Still, this is an enjoyable dose of garage pop-punk from one of contemporary punk's most enduring songwriters, and is a strong enough first entry to make us want more.