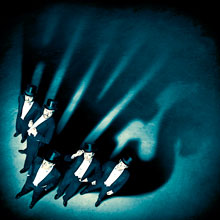 Releasing a tepid record and then staying off the radar for five years isn’t the smartest career move to make in today’s accelerated music culture. But the Hives simply didn’t care. Were they crazy like foxes, or just waiting to see what kind of paychecks Refused were going to get for their reunion? Does it even matter? No, because Lex Hives finds the Fagersta, Sweden, delegation redeeming themselves for their previous missteps and their truancy. No skits, no instrumental in-jokes: just rock. Starting with the 68-second “Come On!”—a request so dumb, a BrokenCYDE fan would need a lyric sheet to comprehend it—the Hives spend the next half-hour chaperoning listeners through mid-tempo party rockers and blitzkriegs powered by drummer Chris Dangerous’ caffeinated pulse and Howlin’ Pelle Almqvist’s attitude. Almqvist is the model frontman, who can boost the ’tude (“1000 Answers”), lead new soul-rebel gangs (“Midnight Shifter”) or be unabashedly idiotic (“Wait A Minute”). And that’s their secret: The Hives have an innate appeal to shoebox-headed dudes in ballcaps doing kegstands and girls who bite their bottom lip and whip their hair when they move their hips. Party on, Reinfeldt…