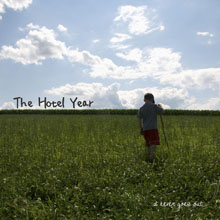 It Never Goes Out

One would never guess that It Never Goes Out is actually a proper full-length if they weren't told. Instead, the Hotel Year’s debut LP plays like the compilation of an ever-evolving band with hints of real brilliance along the way.

Opener “Our Lives Would Make A Sad, Boring Movie” is raw, fast and scrappy melodic punk you'd expect to hear any group of competent 18-year-old locals to bash out, with the relatively nascent power-pop of “Vacancy” following. Not a bad pair of songs to kick it off, though, as they're sincerely played, and one can hear the potential and quick flashes of creativity.

But then, out of nowhere, a sense of maturity and greater influence suddenly starts to grace the album. First, a surprising alt-country twang rears its head on “Lonely Hearts Club.” “An Ode To The Nite Ratz Club” and “Weathered” are excellent hybrids of Piebald's yelping quirk and the Weakerthans' patient storytelling, while “I'm Gone” carries a strong Into It. Over It. vibe. The emotionally desperate “Still-Water Spectacle” combines earnest, dynamic vocals (either painstakingly sung, urgently spat or cathartically joined in chorus) and heartstring-tugging guitar tones with intricate, thudded percussion, spinning it all into an unpredictable buildup.

Are these kids just out of high school, or dudes in mid-life crisis mode? The band's promo shots seem to indicate somewhere closer to the former, but occasionally, their songwriting abilities hardly indicate such youth. Pairing solid, creative pop-punk songs with heartfelt and demanding, intricate pop songwriting, the Hotel Year have laid down a hell of a foundation.

“An Ode To The Nite Ratz Club”