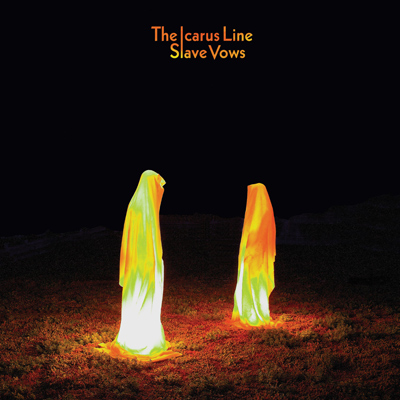 It’s hard to think of Icarus Line frontman/catalyst Joe Cardamone as anything but a doomed figure. Not because he signed a bad sphincter-clenching record deal or has three square meals of meth daily or any of the other clichés that inevitably plague people who make furious, passionate, clinically bent rock music. Given the antiseptic tastes of music fans, Cardamone could make better bank being an assistant for some vacuous Hollywood figure or manage the life of some pop starlet and scoop 20 percent off the top. Fortunately for all of us, Cardamone is still a driven son of a bitch who can’t do anything else but open a vein and shake his arm vigorously into a studio vocal booth.

Which brings us to the appropriately titled Slave Vows. The Icarus Line’s sixth album is scarred, clandestine and alluring, much like meeting a stranger who has the capabilities to turn you on—or turn you off, dead. The slow-motion, 11-minute opener “Dark Circles” captures all of the visceral danger of the best ’60s psychedelia while merging with all the bad darkness of 21st century living. That track alone covers the bounced checks Primal Scream and the Cult have written over the past few years. Cardamone frantically reminds you during “Don’t Let Me Save Your Soul” not to look to him for answers, but only the keys to bust out of whatever cell is holding you. The bad-trip desperado drawl of “Marathon Man” is teeming with desperation and the kind of squealing death-ray feedback that would make MC5 veteran Wayne Kramer weep in adulation. The cacophonic two-minute tantrum “No Money Music” finds our leader in a world where Suicide’s Alan Vega did all the vocals on the Jesus And Mary Chain’s Psychocandy. “Laying Down For The Man” is the best sonic stem-cell project of Loop and the Stooges the planet has seen in a long time. Simply put, Slave Vows is the true follow-up to 2004’s blistering Penance Soiree, only with more revenge against the status quo, cloaked in shades of opaque black.

Hold the Icarus Line close to your heart. Because although it feels like another Pyrrhic victory for Cardamone & Co. to make another record, this reviewer is glad they’re still out there, flipping over cars and flaming oil barrels, and doing double-time in the trenches when all of the planet’s previous rock heroes have phoned it in, expired on the battlefield or have simply lost the fire. He’s a slave to the essence of rock ’n’ roll and he’s okay with it. Help him build a pyramid.

“Laying Down For The Man”