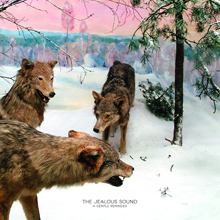 Much will be written about the Jealous Sound's return from nearly a decade of dormancy with A Gentle Reminder, and that's because it's a compelling story—after knocking on the door of major labels in the early ’00s, racking up tons of positive press for their debut full-length Kill Them With Kindness and hitting the road with everyone from Armor For Sleep and Piebald to the freakin' Foo Fighters, the band just sort of vanished, with frontman Blair Shehan moving first to Las Vegas, then to Florida to get away from the rock 'n' roll lifestyle. Everyone considered the band to be kaput—then, out of the blue, the band reconvened to be the opening act for Sunny Day Real Estate's reunion tour in 2009, with SDRE/Foos bassist Nate Mendel filling in on the four-string. Then they disappeared again for another two years. Now, out of nowhere, they've delivered their sophomore full-length, A Gentle Reminder, and while it might not be worth the nine-year wait it's had to endure, it is pretty much exactly what should be expected from Shehan & Co.: extremely nuanced, deliberately paced pop-rock that never takes the easy way out with a simple chorus or basic chord progression.

The band have been whittled down to the core duo of Shehan and guitarist Pedro Benito, as their rhythm section (which at one time included former Jawbox drummer Adam Wade) has cycled itself out a few times. On this album, drums were played by Bob Penn, with bass duties being split up between Mendel and Josh Staples (the Velvet Teen/the New Trust), the latter of whom is also their touring bassist. Mendel's steady hand is felt all over the recording and his influence on the recording process is evident—the album was put to tape at the Foos'  personal studio by their longtime engineer John Lousteau. Still, don't expect a ton of hard-rock riffs and frequent screaming fits a la Dave Grohl; Shehan's voice, while lower in register than it was on previous releases, is still etheral in its beauty. The way he constructs melancholy vocal melodies to slide effortlessly along Benito's twinkly guitar lines is nothing short of brilliant.

The album's only real fault is its unwavering consistency from track to track. There aren't enough differences in tempo and dynamics to really set too many of the songs apart from one another, instead letting a number of them blend together into a sort of mega-mix. When Shehan finally lets 'er rip on the chorus of “Equilbrium,” you can't help but get excited that a new element has been added into the equation. Still, it's not like these songs are “bad” by any stretch of the imagination. On the contrary: This is a primer on how to construct mature, interesting pop-rock, and younger bands should begin studying it immediately.