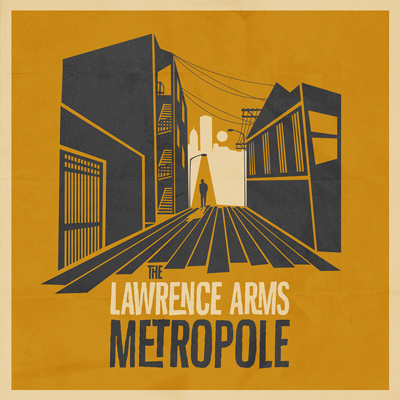 The best punk rock matures with age; the best punk-rock bands accept growing up and resist the fight against it, using it to their advantage. The Lawrence Arms are doing just that on their sixth album. While the Chicago pop-punk band have always jumped back and forth between screamed, emotional punk (think the Menzingers, except, you know, before the Menzingers existed) and a more subdued, melodic sound, here the latter shines all over the former, even when a song combines both of the band's personalities, as on the excellent “Hickey Avenue.” But a song like the amazing album highlight “Beautiful Things” carries so much in its restraint, and showcases the true power of what the Lawrence Arms have created. The song jumps between a nostalgic look back at being young and confused and a realistic—but never jaded—view of life in the big city as an adult. Its lyrical discoveries are echoed in the music, which flows instead of lurches. Then there's “The YMCA Down The Street From The Clinic” and the title track, which are subdued to the point of morbidity, the tales—and the vocal deliveries—almost too downtrodden to handle, but not quite. On “Paradise Shitty,” the band take a classic-rock anthem and turn it into something else: “Take me down to that city/Where the girls just look okay.” Should be funny, but no one's laughing.

The worst part about Metropole—and this sounds at first like an odd critique of a punk album—is the occasional too-bratty sound and the onslaught of swearing. There's nothing inherently wrong with cuss words, but sometimes it reduces great art to mere playground arguments. This isn't Propagandhi-esque swearing for a reason; this is swearing at every available opportunity. Still, this is a great album, one that carries the burden of growing up on its shoulders, but uses it for good instead of endlessly fighting against it, which punk bands need to do as they grow up. You know, they have good reason to embrace getting older: the future has never looked brighter for the Lawrence Arms.