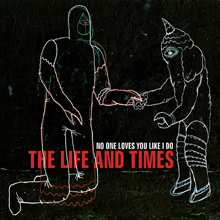 The Life And Times

Kansas City’s the Life And Times have spent nearly a decade honing their lysergic space-rock jams. Their third full-length, No One Loves You Like I Do, is a logical sonic continuation of 2009’s Tragic Boogie—which is to say, it’s a solid collection of grayscale post-rock with metallic shoegaze signifiers and elegant keyboard weirdness. The slow-churning “Day Twelve” could fit neatly on Failure’s Fantastic Planet, while squiggly synth streaks, reverb-slathered vocals and chugging riffs drive the post-metal trudge “Day Six.” No One Loves You Like I Do’s best songs, however, are brisk and biting: Drummer Chris Metcalf is a ferocious timekeeper who adds menace to the creepy “Day One” and delicious chaos to the instrumental calculus of “Day Two” and “Day Eleven.” The album’s final song, “Day Eight,” is even mightier. After two minutes of vocalist/guitarist Allen Epley accompanied by simple acoustic guitar, the song suddenly envelops listeners with Tectonic-plate-cracking noise and droning guitars, like a TV channel broadcasting the apocalypse.

No One Loves You Like I Do’s lyrics match these foreboding textures. Concerned with romantic obsession—of the deranged and healthy variety, although mostly the former—the album has a vague sense of terror always bubbling just underneath the surface, which adds the perfect amount of uneasy friction to the music. If the record has weak spots, they’re slower songs such as “Day Five,” whose distorted singing and funeral keyboard pulses don’t really meander anywhere interesting. Still, a few mushy moments here and there don’t dilute the power of this album—and the fact that few modern bands can touch the Life And Times.