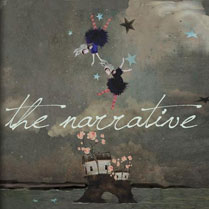 New York City piano-rock trio the Narrative have been on a tear since self-releasing their debut EP Just Say Yes, two years ago. The group’s momentum has not wavered with the release of their self-titled full-length debut, which checks in with 13 tracks over 52 minutes. Album opener “Fade” starts off with a Postal Service-esque drum machine before keyboardist/vocalist Suzie Zeldin’s velvety smooth voice takes over, leading the band through a big crescendo in the song’s chorus. But if a polished female voice isn’t what you’re looking for, guitarist/vocalist Jesse Gabriel provides a rugged counterpoint to Zeldin, as heard on “Trains” where the duo exchange lines across a bouncy piano riff. Although The Narrative is a bit lengthy (eight tracks are more than four minutes long), the craftsmanship the trio took into creating the album is evident. Hopefully this will be the last time the Narrative will have to self-release their music; labels, take notice.