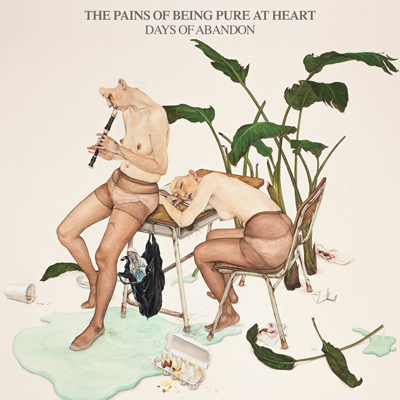 The Pains Of Being Pure At Heart

The Pains of Being Pure At Heart frontman Kip Berman achieved as many of his life goals as possible right out of the gate: releasing music on one of his favorite labels, appearing on late-night TV, working with famed U.K. producer Flood (Depeche Mode, Nick Cave) and finding an appreciative audience in every city of a world tour. So, what’s the next step? Shake everything up, apparently. The band that Berman put together to tour on his beloved 2009 debut and who helped record its 2011 follow up Belong are all gone on album No. 3. Considering that the mercurial leader has always really considered this a one-man show, it’s not terribly surprising. Considering the shift in tone Berman apparently wanted to take on Days Of Abandon meant the move was a necessary one.

Now that he’s exorcised his twee and shoegaze demons, what’s left is a twirl through the early-’90s sound that emerged in response to those genres. It gives these new songs a glossy, feather-light feel, replete with shimmering guitar tones, breathy vocals from Berman and his new female foil Jen Goma (A Sunny Day In Glasgow), and every potentially scratchy edge smoothed out for easier swallowing. Abandon just doesn't particularly fulfill as a whole. What made the previous two albums so successful on an aesthetic level was that it felt like was nudging a well-known sound into new territory. These 10 songs lean into the safety of a template drawn up by acts like the Ocean Blue and Aztec Camera. It’s a pleasurable enough listen but seems dedicated to stroking the pleasure center of pop nostalgists.

Viewed through that lens, Abandon is a success. Berman has all the right effects pedals in place. The reverb is just so on his vocals. He cedes the spotlight to Goma at just the right moments, to give “Kelly” and “Life After Life” those extra bits of gauzy sentiment. The tempos stay tempered for the most part, only getting a little giddy-up in its step to counter some of the more lovelorn sentiments in Berman’s lyrics. Slap a 4AD or Creation logo on the artwork of this one and insist it was from 1991 and we’d be none the wiser. Trouble is that it is 2014 and it’s much easier to follow the threads of this sound back to their source. Evolving as an artist and moving a musical approach forward doesn’t necessarily mean completely shedding the people and ideas that got you here. It just means challenging yourself to move further ahead, building upon your established foundation.

Berman couldn’t help himself and, instead, decided to rip it up and start again. With what he accomplished on up to this point, it’s probably best to wait and see where he’s going to take it from here. By then, maybe this album will appear in a better light in retrospect. For now, it just comes off like an unnecessary retreat.