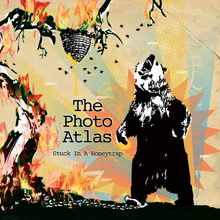 Stuck In A Honey Trap

Since their 2004 formation, the Photo Atlas have been poised as the next big thing out of Denver but have not jumped on the available bandwagons provided by their scenemates in Fear Before and 3OH!3. While Stuck In A Honeytrap is only their second full-length, it shows the rewards of the near-decade the band spent road testing their vice-laden dance punk. Throughout Honeytrap, the band pushes their boots-’n’-pants drum beats just above comfortable dancing tempos and seal the nervous package with venomous guitar lines and Alan Andrews’ hypersexual yelps (think Relationship Of Command-era Cedric Bixler making 3 a.m. booty calls to an ex). When the band collapse into a half-time groove on “Move It Darling,” it sounds less like a breakdown and more like a band actually breaking down. The most contentious aspect of Honeytrap is its uniformity; like Minus The Bear or Interpol, the Photo Atlas have a sound and they’re sticking closely to it. Plus, fans of the band’s To Silently Provoke The Ghost EP produced by J. Robbins may find the sound of Honeytrap a tad lacking. But if the only complaint about a record is that the snare drum could sound better and the Photo Atlas are too consistently awesome all the time, then it’s a damn good record.