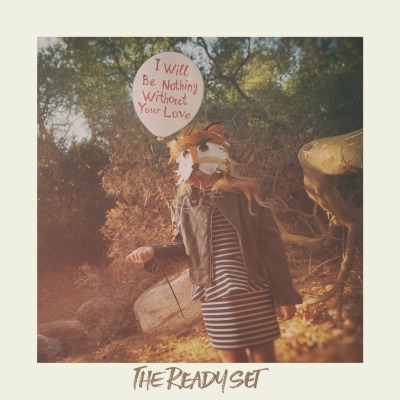 I Will Be Nothing Without Your Love

Jordan Witizgreuter—who has been creating music under the Ready Set moniker for nearly a decade—is all grown up, and that's quite clear on I Will Be Nothing Without Your Love. Whereas 2014's The Bad & The Better was built upon radio-ready pop anthems, Witizgreuter's approach on Love is more subtle. The sickly sweet, bubblegum vibe and larger-than-life choruses are gone (along with the sneaking suspicion that every track is specifically tailored for Top 40 chart domination), replaced with simple, sophisticated drum machines and airy soundscapes. This is not to say that the album marks a complete change in the Ready Set’s sound—instead Witizgreuter exhibits a mature progression away from his third record, turning his focus to explore the softer side of pop.

Despite the departure from its predecessor, Love is still pure fun, and is perfect as the soundtrack to a lazy summer night spent with friends. Listeners will find themselves dancing in their seats and humming along to the melody of the opening “Disappearing Act.” These innate responses set the pace for what is to come over the next 12 songs. The title track exemplifies the record's stripped-down nature, relying on finger snaps and buoyant synthesizers to carry the brunt of the song. Ansley Newman of up-and-comers Jule Vera makes a stunning cameo on the breezy, reggae-inspired “No Love,” a definite standout as the most unique track on the album—and one of the catchiest as well.

Although songs begin to blend into one another and certain hooks become repetitive over the span of the LP, I Will Be Nothing Without Your Love is well worth a listen. This is a record for pop lovers made by a man who, over the course of four full-lengths and several EPs, has become a master of his craft. It might not offer much for those who aren’t fans of the indie electronica scene, but for those that are, the album shows a wonderful example of artistic growth for the Ready Set, a change that will hopefully be welcomed with open arms.