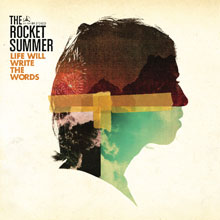 Life Will Write The Words

The shelf life of a pop star is meant to be brief. Does anyone really think Justin Bieber (or One Direction, for that matter) is going to be a relevant cultural force in five years’ time? Chances are, no—because these acts function as a gateway artists for young fans, who are still figuring out their identity and musical taste.

The prognosis for pop-rock stars, in contrast, is much better. Most of the luminaries who found fame in the last decade—Pete Wentz, Andrew McMahon, William Beckett and Max Bemis, to name a few—were talented songwriters in addition to pretty faces. As a result, most have been able to transition into adult careers, because their fans have grown up with them.

The Rocket Summer’s Bryce Avary falls squarely in the latter camp. Since releasing his first EP at age 16, the Dallas native has carved out a successful niche for himself—thanks to the nasally (but playful) quirkiness of 2003’s Calendar Days, the spunky power-pop of 2007’s Do You Feel and even the soccer-mom radio rock populating 2010’s Of Men And Angels. Life Will Write The Words, the Rocket Summer’s fifth LP, is more focused than Angels. (At 12 songs and 46 minutes, it’s also shorter.) It also boasts some of Avary’s most concise songwriting to date (the vast majority of the songs are four minutes or less) and a self-confident, unfettered vibe that’s invigorating.

This ebullience shines through via his vocal performances. While Avary hasn’t lost the earnest energy of his early work, he channels this enthusiasm with maturity and finesse—from the desperation inherent in the Tom Petty-style rager “200,000,” the longing permeating the wails of “Run And Don’t Stop” and the fluttery falsetto and soul strut of “Prove It.” (On several songs, notably the easygoing, amplified folk-rocker “Old Love,” he even resembles the Gaslight Anthem’s Brian Fallon if he huffed helium.)

The grown-up vibe extends to Life Will Write The Words’ music. It’s not a new comparison, but Jack’s Mannequin’s later work in particular is an obvious touchstone, from the raucous rock of “Ashes Made Of Spades” and “Prove It” (the latter of which also has a jagged guitar solo) and the somber solo piano number “Scrapbook.” Still, the album embodies everything which makes the Rocket Summer so great—whether it’s the gorgeous, acoustic “Soldier”; the brisk, jazzy piano-pop shimmy of “The Rescuing Type”; the finger-snapping, Ben Folds-like “Circa 46”; and the nostalgic, classic-rock chug of “Just For A Moment Forget Who You Are.”

Most important, there’s a lightness to the entire album, regardless of what subject matter Avary’s addressing. On the should-be-a-set-closer “Revival,” staccato piano, buzzing electric guitar and a repetitive “oh-oh” chorus lead up to an exclamation of, “We’re gonna make it!” A few songs later, during the pensive, soaring “Underrated,” Avary cries out, “All I need is a chance.” Maybe it’s too easy to apply those sentiments to anyone on the fence about Life Will Write The Words—and by proxy, the Rocket Summer’s career. However, judging by the sterling quality of this album, we’d recommend taking that chance.