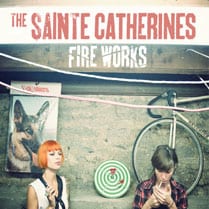 It’s been a long four years since the Sainte Catherines dropped Dancing For Decadence, a raucous piece of melodic hardcore that served as their coming out party in the States. In the interim, several members of the Québécois sextet moonlighted in alt-country outfit Yesterdays Ring, and those exploits shine through perhaps a bit too brightly on the band’s latest effort, Fire Works. The faster, more technical aspects of the Sainte Catherines’ sound are virtually gone, abandoned in favor of more melodic, decidedly gruffer pop-punk with occasionally folky overtures, like a French-Canadian Leatherface. It’s not bad by any stretch; the group effectively use anthemic group vocals (“You Guys Wanna Fuckin' Party After This? No.”), quirky handclaps (“Chub-E & Hank III / Vimont Stories Part II”) and even harmonica (“Back To The Basement That I Love”), but there’s a certain energy and urgency missing from Fire Works that the Sainte Catherines were once able to harness with relative ease. Let’s hope the band are able to better separate their musical endeavors in the future.