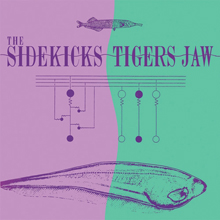 The Sidekicks mixed refined punk and folk-tinged jubilance on their 2009 full-length, Weight Of Air, which functioned as a history lesson on the last three decades of alternative radio. We finally get new material from them in the form of this split with indie/emo/punk wunderkinds Tigers Jaw, who themselves keep true to their habit of issuing a new batch of music yearly.

The Sidekicks begin the split with the melodic, slow stomp of “Little James,” on which frontman Steve Ciolek's wavery voice leads effortlessly. You can hear the band's growth in motion, when the shimmering, atmospheric bridge and Ciolek’s falsetto sneaks in. The Sidekicks infuse a cover of Elvis Costello’s “(The Angels Wanna Wear My) Red Shoes” with subtle alt-country twang, transforming the song into a smiling, sunny toe-tapper.

When the rigid chords of Tigers Jaw's “Jimmy Piersall” come in, it's shocking how crisply the recording sounds. This is some of the best production Tigers Jaw have ever been blessed with, and toning down the fuzz does them well. The guitars sound focused, the keyboard tones warm and level. The band's nasal moroseness is restrained just enough on both that track and the yearning “Boots 'N Hanks,” so that their brand of slow-to-mid-paced emo-indie-punk becomes a pleasant pair of defeated, shoulder-shrugging moments. Some of Tigers Jaw's best stuff appears on their short-form releases, and while this would probably fall right behind 2009's Spirit Desire 7-inch and last year's split with Balance And Composure, it's hardly an exception to the rule.