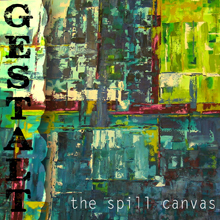 Score another for Kickstarter. In the same year that we have a fine new Matt Pryor record to enjoy thanks to the revolutionary capital-raising web sensation, now there’s also a long-awaited new release from the Spill Canvas, after the Sioux Falls, South Dakota, quartet, formerly on Reprise Recods, raised $35,000 through the site in less than 60 days. Everyone who chipped in, plus those fans who didn’t, will all be pleased to learn that the cash was well spent, because Gestalt—the band’s sixth proper full-length and first since 2010’s Formalities—is one monster of an album, especially for an outfit who were on “indefinite hiatus” a year ago.

The newfound creative freedom clearly suits the reunited band, and thus Gestalt presents a wide array of textures and tones, from hushed, serene near-acoustic serenades such as the album-bookending “Whiskey Dream Kathleen” and “Sabotage Eternal” to spacious rockers “Chemicals” and “The Med,” to the moody, mid-tempo “Off A Cliff” and “To: Chicago” (the latter of which features Andy Jackson from Hot Rod Circuit/Terrible Things). Frontman Nick Thomas sounds in notably fine form, handling the varied sonic terrain with a consistent poise at times reminiscent of Rob Thomas (“Parallels And Money,” “Firm Believer”) fused with Jim Adkins (“From: San Francisco”). The music perpetually twists into intriguingly unexpected corners—including some skilled, tasteful splashes of electronics and piano—amid a strong melodic base and sturdy rhythms.

Even after nearly a decade together, the Spill Canvas reach some incredible heights on Gestalt, particularly penultimate cut “My Vicinity,” a towering, apologetic ballad that soars as huge as they come. Not just a career re-kindler, Gestalt is also a brilliant reminder that bands needn’t die when they can DIY—not to mention the product might turn out pretty great in the end.