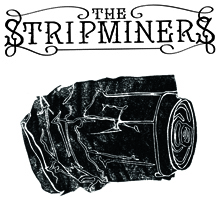 The debut 7-inch by Los Angeles-based band the Stripminers is an attempt to generate some buzz about a generally buzz-unworthy band. Led by Brett Anderson of the Donnas and Paul Stinson of the Radishes, the Stripminers would have fit right in with the second-tier ’90s alt-rock scene. Similarities to Veruca Salt and the Didjits aside, this band fall flat on what we’re assuming are the best three songs from their upcoming album. “Poison In The Paint” is an alt-country plodder that hinges itself on Stinson’s deep drawl and Anderson’s uninspired background vocals. “You Make Dyin’ Fun” starts off like a straight-up thrasher—we had to check that the shuffle button wasn’t on—but then reverts back to the band’s brand of “meh-whatever,” garage-rock/punk. “Movies,” the best tune of the trio, is a peppy rock song with some swagger and attitude. But even then this would have been bargain basement ’90s alt-rock, had the Stripminers not been two decades behind the times.