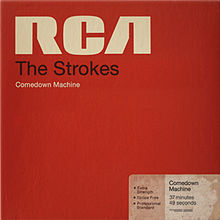 Few who saw and heard the Strokes when they burst forth from the New York City music scene more than a decade ago would have predicted that the quintet still be around today, let alone releasing their fifth album. The group had a sound and an attitude that seemed primed for a quick burnout. Yet, here they are, original lineup intact and on Comedown Machine maturing as a unit in an absolutely appropriate fashion.

There are still elements of the stripped down rock sound that marked the Strokes' whipcrack debut Is This It—the tickling interplay between Albert Hammond Jr. and Nick Valensi's guitar playing, frontman Julian Casablancas' just woken up vocal delivery. But as on the band's last full-length (2011's Angles), many more influences are coming to bear. “80's Comedown Machine” has a delirious, bent psychedelic feel, and tracks like “50/50” and “Partners In Crime” let the group get as straight-up punky as they're likely ever going to get.

Those songs succeed because they are rooted in the band's signature sound. Pull away the keyboard overlays and the vocal and guitar effects, and you'd still recognize the Strokes. It's when the five try to sound like anything but themselves that things fall apart. “One Way Trigger” is one hot mess of an example, with Casablancas going into a weird falsetto while the rest of the band attempt an uncomfortable world beat/new-wave hybrid. The album's final statement, “Call It Fate, Call It Karma,” too, loses the plot with a muted attempt at psych-jazz.

Comedown is not a record that will set the world ablaze in a fashion akin to their previous work, but the Strokes had to have known that when they went into the studio. It's an LP that finds the band in complete comfort with in their place in the musical universe and willing to stretch out here and there into slightly uncomfortable postures. That they manage to score far more hits than misses here is only further proof that the band's inevitable fade away is still a long time off.