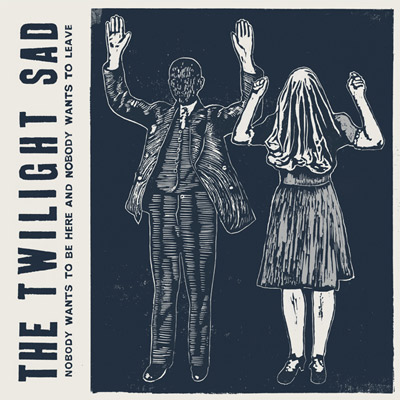 The Twilight Sad have been plugging away for more than a decade, amassing a sizable catalog that's progressed from the sort of autumnal, patient anguish practiced by their Scottish contemporaries Frightened Rabbit, forth towards darker, drawn-out and noise-ratcheted shoegazey catharsis, and then to black-decked, electronic-smoked post-punk, all the while sidestepping trends and striking their own sort of gold. The two other Scottish indie-rock bands consistently mentioned in the same breath, We Were Promised Jetpacks and the aforementioned Frightened Rabbit, have both gone on to garner respectably large followings both in their homeland and in the U.S.; amazingly, the Twilight Sad remain more cultishly loved, though they've certainly had the most compelling musical journey of the three. On Nobody Wants To Be Here And Nobody Wants To Leave, they make a desperate and thrilling case for why they might be a little more deserving of far more eyes and ears than are currently on them.

Their fourth full-length is actually a fine summation of the moodier shadows and dramatic pacing they've made their name on thus far, while it weaves its own musical and lyrical narrative arc. Opener “There's A Girl In The Corner” could be an OK Computer-era Radiohead cut drenched in palpable regret and a bit of theremin, which adds a spookier slant to other tracks without slipping too far into the campy aura of a certain recently passed holiday. Singer James Graham spends the album agonizingly casting blame, and it's often upon himself: On “Drown So I Can Watch,” he pronounces, “I put you through hell/But you carry it oh so well” atop a hopeful key, admitting his wrongful actions but complimenting his victim for their determination. “There's A Girl” certainly seems to hint he's pointing fingers at himself as well.

This is a common occurrence on Nobody, which musically skirts the post-punk revival/indie rock line with flair, morosity and reverb-heavy space. Graham doesn't quite fully let loose on his howl like he used to on 2009's Forget The Night Ahead, instead showing the same tense restraint that marked 2012's No One Can Ever Know. While it's missed, it still grips cuts like the National-esque “Last January” and the abovementioned “Drown So I Can Watch” with brilliant tension and control. Hell, he can even scale it back for a beautiful, bright moment like on the otherwise fuzzily synth-guided “It Never Was The Same,” and adds a doe-eyed dreariness to “In Nowheres,” which actually gets far shoegazier than Forget ever was, really.

Nobody bravely wraps up with a pair of the most comparatively balladic songs on the album, “Leave The House” and “Sometimes I Wished I Could Fall Asleep.” While the latter's a painful witnessing of a narrator accepting the acts of growing apart and breaking up, finding begrudging closure at the end of the album, the former's the slightly better of the two: “Leave The House” is predictably mournful, with Graham's echoed brogue softly leading the way and punctuating the bridge with a repeated refrain before a momentous pause and a delicate, climactic bang that picks it back up simply to gently put it back down.

While it's hard to recommend Nobody Wants To Be Here And Nobody Wants To Leave outside of an environment of solitudinous nighttime drives (don't expect to hear this kickstart any parties), it's a deeply encompassing and occasionally profound experience that deserves to be felt by far more than the few lucky to already be inside the Twilight Sad's too-small circle.