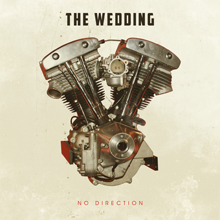 The Wedding (fronted by former Letter Kills singer Matt Shelton) make their Tooth & Nail debut with an album that is strong, but arguably disproportionate. No Direction’s title track leads off the record with a home run, as it’s far and away the catchiest track on the record—a catchy, mid-tempo, radio-friendly pop-rock number, complete with anthemic choruses, the “radio” vocal effect bridge, and the half-time outro. It’s nothing you’ve never heard before, but it’s infectious, and a bold move to start the album at such a high point. Unfortunately, the rest of No Direction takes a circuitous route from there on and never really gets back to the pinnacle reached by its opening salvo.

The title track is followed up by two energetic jams, “In The End” and “The Lesser Worth” (featuring vocalist Dan Marsala of Story Of The Year). Both are strong in their own right, and both are a bit of a Southern-rock-riff left turn from the first track, but solid, despite the mild schizophrenia. “Hang On Love” sounds like it could very easily fit into a Jimmy Eat World setlist. It’s a well-constructed, downtempo, catchy anthem; a solid bookend that would wrap up an EP nicely, but we’ve still got seven tracks to go.

The album hits the snooze button at the midway mark with the sluggish ballads “The Wildest Ocean” and “Mors Tua Nos Vita”, and slowly peters out from there with a handful of songs that never really reach the highs of its first half. It’s not that the two mellow songs are “bad” per se, it’s just that sticking eight-and-a-half minutes of melatonin into a record that is otherwise energetic seems like a sequencing fail more than anything else. The back end of the album waddles through what feels like a diet version of its strong first half.

No Direction is an album that should resonate with fans of Story Of The Year (see: the Dan Marsala guest spot) and the Used. But the album lacks the sass and heaviness that helped the Used make a name for themselves, and doesn’t quite carry the riff-driven energy that Story Of The Year built a fanbase on. The Wedding manage to fuse the two in a way that feels awfully familiar, but just fresh enough to keep them from being an easy toss into the already overflowing radio-ready rock waste bin.