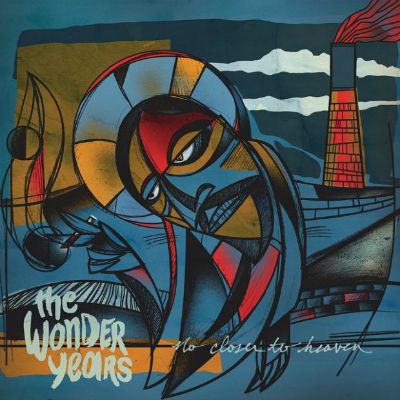 No Closer To Heaven

Over the past four years—and the course of three beloved albums—the Wonder Years have rapidly risen through the pop-punk ranks on their way to cementing themselves as the genre’s leading force. If the band’s fifth album is any indication, they seem unlikely to give up the throne anytime soon. Simply put: There’s not another band in this scene who could replicate what the Wonder Years have done here.

No Closer To Heaven doesn’t mark a huge sonic shift for the Philly sextet, but their rough-around-the-edges brand of pop punk is augmented by adventurous new textures. The band are truly utilizing all three of their guitarists for the first time in their career, bringing new life (and negative space) to songs such as the droning “A Song For Patsy Cline” and “Stained Glass Ceilings,” tracks that very much make the album headphone-required listening. These post-rock/alt-rock detours mean things are, as a whole, a tad slower than in the past—but don’t confuse downtempo with boring. Look no further than the first single “Cardinals,” which has neither the bounce or BPMs of some of the band’s most beloved songs, but makes up for it in sheer force.

But for all its praiseworthy musical moments, No Closer To Heaven truly shines lyrically. After addressing his battles with depression over three albums, frontman Dan Campbell pulls no punches here: Whether he’s embarking on a takedown of big pharmaceutical corporations (“Cigarettes & Saints”), rallying against systemic racism and classism (“Stained Glass Ceilings,” featuring a scorched-earth cameo from letlive.’s Jason Butler) or detailing head-over-heels romance (“You In January”), the singer convinces you his every word is gospel.

Ultimately, that’s what draws many listeners to the Wonder Years: the crushing realism, the often-uncomfortable truth staring you down. When Campbell sings, “I’m sure there ain’t a heaven/But that don’t mean I don’t like to picture you there,” to a late friend on the heartbreaking “Cigarettes & Saints,” the true greatness of the Wonder Years is on full display. It’s the push and pull of an idealized world juxtaposed with harsh reality. It’s when who you want to be and who you are don’t intersect. But despite the heavy topics (socially driven and otherwise), No Closer To Heavendoesn’t feel morose. Instead, Campbell’s lyrical themes preach progression over perfection, and in doing so, this collection of songs finds the band both maturing nicely, and as close to flawless they’ve ever been. [HOPELESS; hopelessrecords.com]